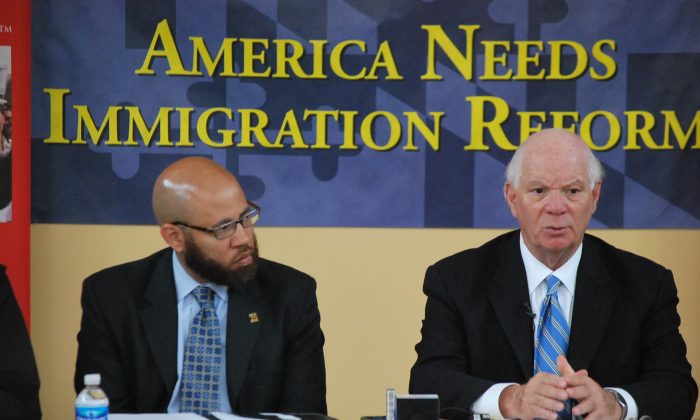 HYATTSVILLE, Md.—Senator Ben Cardin (D-Md.) expressed hope that a bipartisan immigration reform bill will pass, when he met with community leaders and immigration advocates May 21 in Maryland.

In the roundtable discussion hosted by Casa de Maryland, a social, political and economic advocacy organization in Hyattsville, the senator answered questions and collected the thoughts of his constituents, which he said he plans to share with his colleagues.

“Now that the Senate is moving forward on a bipartisan plan and members of the House of Representatives have developed a bipartisan plan, there is real hope that we can achieve reforms that would strengthen border security, create a fair legalization program, and create a workable system to ensure that employers only hire legal workers in the future. We also should not forget that immigration reform also is about keeping families together and ensuring that immigration laws are respected, ” said Cardin.

He said he sees a positive economic impact from immigration reform, and some believe economic benefits have not been a strong enough focus of the debate.

The Senate Judiciary Committee has now passed a comprehensive bill with a bipartisan vote to remake immigration laws, enhance border security and put the estimated 11 million people living here illegally on a path to citizenship.

The full Senate is to take up the legislation in June. Supporters are hoping to see the bill pass by a wide margin, with as many as 70 votes in the 100-member Senate.

That’s seen as a way of pressuring the House to act. If the Senate does pass a bill, it’s likely to be more liberal than what the House group might produce and more to the liking of many liberals in the House, including some of the Democratic leadership.

But House Speaker John Boehner, R-Ohio, issued a statement along with his top lieutenants Thursday promising the House would act on the issue, but making clear House members would not accept any bill passed by the Senate.

“The House remains committed to fixing our broken immigration system, but we will not simply take up and accept the bill that is emerging in the Senate if it passes,” the statement said.

The Leadership Council on Civil and Human Rights released a letter urging the Judiciary Committee to oppose Senator Jeff Sessions (R-Ala.), Amendment 31, which would deny the earned income tax credit to anyone who is not a citizen or a permanent resident, according to the letter.

“This sweeping and unnecessary amendment would greatly harm many of the very people that S. 744 aims to help. By denying the EITC to any non-citizen who is not a lawful permanent resident, Sessions amendment 31 would eliminate the EITC for people who have obtained Registered Provisional Immigrant (RPI) or “blue card” status under the underlying bill, penalizing them even though they have taken extensive steps to regularize their status,” read the letter addressed to the Chairman of the Judiciary Committee Patrick Leahy, and Ranking Member Charles Grassley.

Media reports also indicate some tension between members of the House and Senate over the legislation.

Republican Rep. Steve King last week was quoted in the Washington Post saying that the Senate immigration bill is worse than Obamacare, in his view.

Even senators who don’t describe the bill as a Democratic political ploy as King did, have expressed doubt over the probability of the Senate bill clearing the House without major changes.