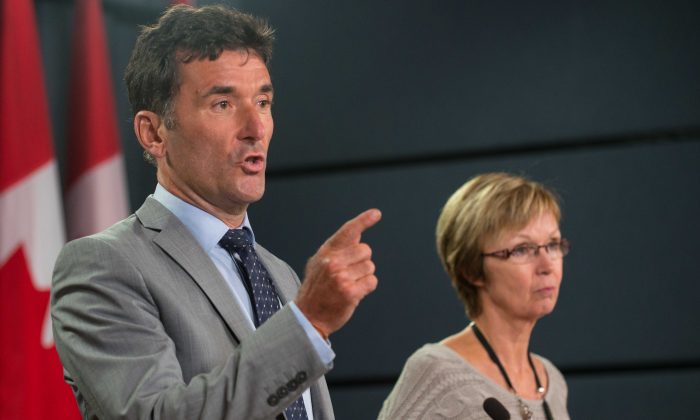 PARLIAMENT HILL—The Senate has become an albatross around Prime Minister Stephen Harper’s neck, with two of his most prominent appointees being racked by scandal made more intense by their efforts to avoid it.

This week, Senator Pamela Wallin was on the defensive, rejecting a Deloitte audit of her unusual travel expenses. Wallin has been asked to repay $121,348 in expenses, $38,369 of which she has already repaid.

But while Wallin rejected the findings of the audit, the senate committee that commissioned it was troubled enough by what they found to forward the matter to the RCMP for investigation.

The significance of that development was made apparent Tuesday in and oddly coincidental Ontario parole board decision that denied former Liberal senator Raymond Lavigne’s request to spend the rest of his jail term at home. Lavigne was jailed for falsifying $10,000 in travel claims and abusing his office.

The audit and subsequent Senate report on Wallin follow on the heels of a controversy surrounding a $90,000 cheque former PMO Chief of Staff Nigel Wright gave to Senator Mike Duffy to repay his improperly claimed housing expenses. Duffy subsequently used that repayment to stop cooperating with a Senate investigation into the matter.

Like Duffy, Wallin is also being accused of trying to cover up her misdeeds. In what she claims was an attempt to give Deloitte a clean copy of her calendar, she deleted entries, which has raised concerns of a coverup.

The opposition is also using Wallin’s claim that Conservative Senator David Tkachuk, then chair of the Senate’s internal economy committee, advised her to clean up her calendar before sending it to Deloitte, as evidence of an attempted coverup because Tkachuck had frequent communication with the PMO.

The scandal has given the NDP and Liberals ample ammunition to attack the government’s credibility.

NDP foreign affairs critic Paul Dewar slammed the Conservatives over the Senate scandal Wednesday while advancing the NDP’s Tim Horton’s-inspired “Roll up the red carpet” campaign to raise support for abolishing the Senate.

Wallin and Duffy were two of the Conservative Party’s most favoured Senators with high-profile careers as TV journalists that translated well into fundraising and campaign work for the party. Those profiles now make their downfalls particularly embarrassing.

That may in part explain what Dewar describes as a shift in tone from prominent Conservatives.

Dewar said it seems the Conservatives may be warming to the idea of abolishing the Senate.

“It is interesting to see the shift in the Conservatives’ point of view. The Liberals still think [the Senate] is okay. The Conservatives now, because they really couldn’t figure out how to reform adequately, are now thinking, ‘Well, the winds have changed in the country and people do want to see a clear position,’ and maybe that is what they are up to.”

If Harper is warming to the idea of abolishing the Senate, it wouldn’t be entirely new. The PM has said for years that if the Senate can’t be reformed it should be abolished.

But it would seem unlikely for Harper to make a major change on his current stance given the government is awaiting an opinion from the Supreme Court on Bill C-7 which would pave the way for Senate elections and nine-year terms.

The government recently sent a factum to the court to bolster its claim to be able to reform the senate unilaterally. The factum also argues the government can abolish the Senate, if the Senate itself, the House of Commons, and two thirds of the provinces with 50 percent of the population of all provinces agree to it.

Quebec has vowed to challenge unilateral reforms and some experts in the past have argued that abolishing the Senate requires the consent of all provinces.

The idea of abolishing the red chamber is abhorrent to retired senator Tommy Banks. While the tsunami of criticism crashing over the Senate has sullied its name, he cites a long list of accomplishments that make it worthy of preservation.

“The idea of abolishing the Senate is silly,” he says, citing the fact virtually every government has two chambers. He says that is not because those governments are stupid, but because they understand the value of that kind of oversight.

Although he agrees that the Senate is undemocratic and needs to be fixed, he doesn’t like the idea of creating over 100 new politicians by having elected senators. He would prefer a clear and transparent appointment process inspired by how Supreme Court justices are appointed.

“In a democracy you need to be able to see the process,” he says.

Banks notes that the Senate’s role in fixing legislation, stalling bad laws, and producing influential reports that steer government policy more than justify its existence but get relatively little coverage.

He also challenges changing the Senate without consulting the provinces, noting that the upper chamber was created expressly to balance regional power in Parliament and smaller, less populated provinces additional leverage against Quebec and Ontario that dominate the House of Commons.

But Dewar rejected those points, saying a new appointment process is just a tweak that still leaves the Senate filled with appointees.

Dewar, who notes the provinces abolished their senates years ago, said senators are now more likely to battle for their parties than their regions.

He also argued that today’s provinces are much stronger, with greater authority and no longer need the Senate, a point several provinces seem to agree with. (See sidebar.)

When asked why the federal government should have the unilateral authority to abolish the Senate if the provinces still wanted it, Dewar said it should be up to Canadians.

“Are we going to consult the senators about what we should do with the Senate? Or even premiers, and only listen to them? We need to be understanding what Canadians think.”

Critics of Harper’s plan to have elected senators, including Banks, say the Senate would become more powerful and could upset the current law-making process.

Frequent stand-offs between American’s elected houses are a frequently cited example. Harper, however, told Australia’s parliament in 2007 that their reform toward elected senators showed it could be done.

“Australia’s Senate shows how a reformed upper house can function in our parliamentary system,” said Harper.

“And Canadians understand that our Senate, as it stands today, must either change or, like the old upper houses of our provinces, vanish.”