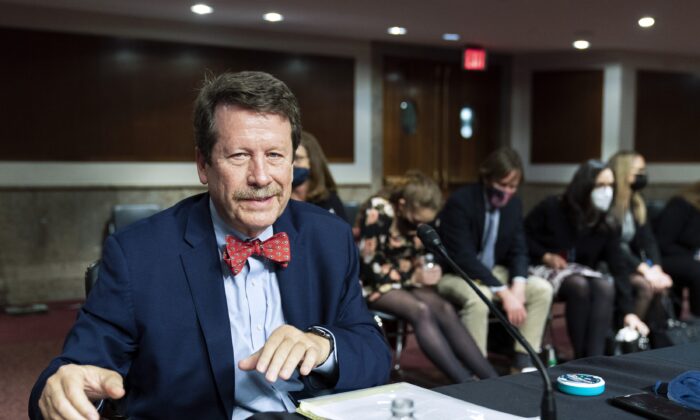 Dr. Robert Califf gathers his documents as the Senate Committee on Health, Education, Labor and Pension adjourn a hearing on the nomination of Califf to be commissioner of Food and Drug Administration on Capitol Hill in Washington, on Dec. 14, 2021. (Manuel Balce Ceneta/AP Photo)
Congress

Senate Vote Set for Biden’s Nominee for FDA Commissioner, Whom Some Democrats Oppose

President Joe Biden’s nominee to head the Food and Drug Administration (FDA) is set for a Senate vote next week after the upper chamber’s top Democrat filed cloture on the nomination on Feb. 10.

Senate Majority Leader Chuck Schumer (D-N.Y.) filed cloture on the nomination of Dr. Robert Califf even as some Democrats continued to express opposition to the pick, who isn’t assured a confirmation in the divided Senate.

Confirming Califf would be “the absolute worst thing that could happen to our country and the FDA,” Sen. Joe Manchin (D-W.Va.) told reporters at the Capitol in Washington.

Manchin has vowed to vote against Califf, as have Sens. Maggie Hassan (D-N.H.), Ed Markey (D-Mass.), and Bernie Sanders (I-Vt.). Sen. Richard Blumenthal (D-Conn.) has indicated he will not vote for the nominee.

A simple majority is needed to confirm Califf, who would be the first Senate-confirmed FDA director since Biden took office in January 2021. But Califf must earn some Republican support, or the nomination will fail in the 50–50 Senate.

Califf’s nomination was advanced by the Senate Health, Education, Labor, and Pensions Committee 13–8 in January. While Hassan and Sanders joined some Republicans in voting against it, Sens. Susan Collins (R-Maine), Lisa Murkowski (R-Alaska), and Mitt Romney (R-Utah) voted in favor. Sen. Richard Burr (R-N.C.) will also support Califf, a spokeswoman told The Epoch Times in an email.

Supporters say Califf’s experience helming the FDA during the Obama administration will come in handy and that they appreciate his promises to review some regulations, including those concerning opioids.

Sen. Patty Murray (D-Wash.), chairwoman of the panel, said Califf is “an experienced leader at the FDA who understands the many challenges our nation is facing and the importance of ensuring science comes first.”

Critics don’t like his ties to the pharmaceutical industry and note he was at the helm during some of the worst periods of the opioid crisis.

“New Hampshire has been hit especially hard by the substance misuse epidemic and it is imperative that we have a strong FDA Commissioner in place who recognizes the role that the agency’s decisions played in fueling this crisis,” Hassan said in a recent statement. “After careful review of Dr. Califf’s record, including questioning him during last month’s nomination hearing, it does not appear that things would be different under his leadership and I will be voting no on his nomination.”

Some oppose Califf because while he was FDA commissioner, the agency loosened rules regarding chemical abortion pills.

Students for Life Action, a pro-life group, plans to meet with senators on Capitol Hill next week, chief media and policy strategist Kristi Hamrick told The Epoch Times in an email. The first meetings will be with Romney and the others who “voted wrong in committee,” she said.

Most of Biden’s nominees have received Senate approval, with Republicans regularly crossing the aisle, but several high-profile nominees were dropped after staunch GOP opposition, including Saule Omarova, whom Biden nominated to be comptroller of the currency.

Califf has swayed at least one senator who was unsure about the nomination.

Sen. Ron Wyden (D-Ore.) said on Feb. 10 that he’ll vote for Califf because the nominee agreed that the FDA should follow up and gather evidence from drug companies that get accelerated approval for their products.

Multiple senators haven’t committed to a vote, including Sen. Pat Toomey (R-Pa.), who led the effort against Omarova. His office declined to comment.