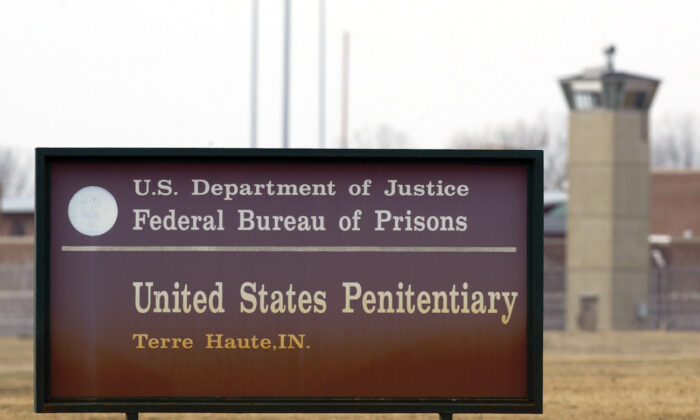 A guard tower flanks the sign at the entrance to the U.S. Penitentiary in Terre Haute, Ind., on March 17, 2003. (AP Photo/Michael Conroy File)
Congress

Michael Carvajal, the outgoing Federal Bureau of Prisons (BOP) director, has been subpoenaed to appear before a Senate committee investigating abuse, corruption, and misconduct in the federal prison system, including at the U.S. Penitentiary in Atlanta.

Sen. Jon Ossoff (D-Ga.), who is the chairman of the U.S. Senate Permanent Subcommittee on Investigations (PSI) and whose home is in Atlanta, announced the subpoena on Monday, adding that Carvajal had been asked to testify later this month.

Ossoff told CNN that Carvajal’s testimony is “vital to our ongoing congressional oversight and to this senate investigation,” adding that the PSI had taken the “extraordinary step” of issuing a subpoena to the former BOP director because the Biden administration has “refused to allow” Carvajal to testify.

The hearing is set for July 26.

In a press release, the Permanent Subcommittee on Investigations also said it has repeatedly requested testimony from Carvajal dating back to this spring, but that “the Department of Justice has refused to make him voluntarily available to testify.”

“To date, the Subcommittee has been provided no legal basis that would prevent Director Carvajal’s testimony before the Subcommittee, and the Department of Justice continues to refuse to make him available to testify,” the statement read.

Carvajal began his career with the bureau in 1992 and served as the assistant director for the Correctional Programs Division before being appointed as BOP director on Feb. 25, 2020, shortly after the COVID-19 pandemic began.

He resigned from his job in January the year after, just months after an Associated Press report revealed widespread misconduct, abuse, and corruption within the correctional agency that appeared to have largely gone ignored.

The same report also found that over 100 workers at BOP had been arrested, convicted, or sentenced for crimes since 2019.

Cases included a warden indicted for sexual abuse, an associate warden charged with murder, guards accepting bribes in return for smuggling drugs, and rampant sexual assault at a women’s prison in California.

The report also noted that two-thirds of the criminal cases against the Justice Department (DOJ) staff in recent years had involved federal prison workers, despite the fact that such workers only account for less than a third of the DOJ’s workforce, including 28 of the 41 arrests made in 2021.

At the time the report was published, Carvajal had faced increased scrutiny over his leadership during the pandemic, particularly in regards to overpacked prisons where the virus was increasingly spreading.

Carvajal told CNN in April 2020: “I don’t think anybody was ready for this COVID, so we’re dealing with it just as well as anybody else, and I’d be proud to say we’re doing pretty good.”

His subpoena comes after the DOJ announced on July 12 that it was replacing Carvajal with Colette Peters, who has served as the Director of the Oregon Department of Corrections since 2012.

The DOJ in a statement to AP expressed its disappointment over Ossoff’s subpoena, adding that it had extensively cooperated with PSI’s investigation and work, and had offered to provide a lower-level official in Carvajal’s place.

It also noted that it was “committed to focusing” Carvajal’s last days in the role on making way for Peters to take over and that the subpoena to testify could prove to be distracting.

“As the Department has previously explained to the Subcommittee, we believe that preparation for testimony just five business days before this critical leadership transition may distract Director Carvajal’s time and attention away from this goal,” the DOJ said in a statement. “Nevertheless, we continue to work with the Subcommittee to find an agreeable solution.”