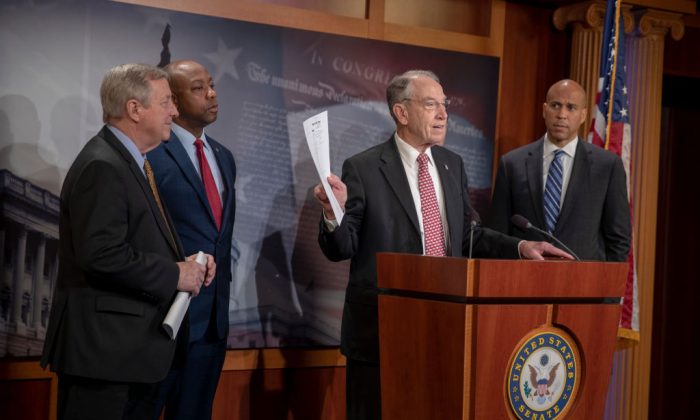 The U.S. Senate on Dec. 18 passed a landmark prison-reform bill, dubbed the First Step Act, that would help inmates readjust to society after completing their sentences, addressing concerns that too many Americans have been imprisoned for nonviolent crimes without support later on.

The bipartisan bill, approved by a vote of 87–12, will expand programs that reduce the recidivism risks of prisoners, such as job training programs, while also reducing the sentences for some low-level, nonviolent offenders. It would also adjust certain mandatory minimum sentences and cut costs.

The act only affects federal prisoners and aims to make the criminal justice system fairer, reduce overcrowding, and, in the process, save taxpayer dollars. Senate Judiciary Committee Chairman Chuck Grassley (R-Iowa) said in a statement that the act’s passage is “the product of careful deliberation and input from a wide range of stakeholders” and hailed it as an “important victory.”

The Senate passage comes after years of overhaul efforts and comes as a major policy victory for President Donald Trump, who has said that he would sign the bill. Trump and Vice President Mike Pence both praised the act’s passage and argued it would help make communities safer. A number of liberal and conservative advocacy groups also rallied in support of the bill.

The House is widely expected to pass the bill sometime this week before sending it to Trump’s desk for his signature. The act, co-sponsored by more than a third of the Senate, has evenly balanced support among both Democrats and Republicans.

“America is the greatest Country in the world and my job is to fight for ALL citizens, even those who have made mistakes,” Trump wrote in a Dec. 18 tweet. “This will keep our communities safer, and provide hope and a second chance, to those who earn it. In addition to everything else, billions of dollars will be saved. I look forward to signing this into law!”

Pence called the reform “Historic” on Twitter and urged the House to pass the act as soon as possible.

The act also preserved the maximum potential sentences for violent and career criminals while providing judges with more leeway in the sentencing of nonviolent drug offenders who cooperate with law enforcement.

One notable provision reduces the life sentence to 25 years in prison for some drug offenders with two or more convictions, compared to the previous “mandatory term of life imprisonment without release.” Senate Democratic Whip Dick Durbin (D-Ill.) said the passage “proved that we can work together for the good of our nation,” adding that he looks forward to seeing it signed by the president.

A number of law enforcement groups have backed the bill, including the nation’s largest police group, The Fraternal Order of Police, which has over 345,000 members. It also has support from 172 former federal prosecutors and sheriffs from 34 states across the country.
Follow Bowen on Twitter: @BowenXiao_
TOP NEWS