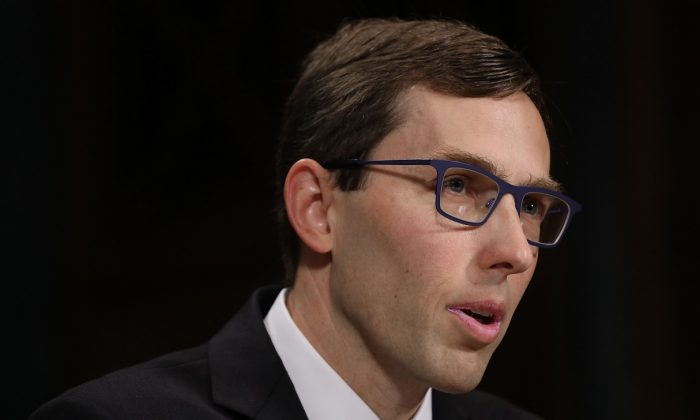 Eric Miller, President Donald Trump’s nominee for the 9th U.S. Circuit Court of Appeals, is heading for confirmation by the U.S. Senate as the first such nominee ever to gain approval without a home-state senator’s blue slip.

In a Feb. 26 statement headlined “Senate to Confirm Impressive Nominee for Ninth Circuit,” Senate Majority Leader Mitch McConnell (R-Ky.) described Miller as having a “distinguished record in both public service and private practice.”

McConnell also noted that Miller “holds degrees from Harvard and the University of Chicago. And his legal experience includes prestigious clerkships on our nation’s highest courts.”

Miller clerked for Supreme Court Justice Clarence Thomas and oversees the appellate practice group for the Perkins & Coie firm in Seattle. He has argued 10 cases before the nation’s highest court.

The Senate voted 51–46 late Feb. 25 to end debate on Miller’s nomination. McConnell is expected to schedule the final vote later this week.

Before the cloture vote, McConnell said Miller’s record “reflects a legal mind of the highest caliber,” but neither of Washington state’s senators—Democrats Patty Murray and Maria Cantwell—supported the nominee.

If Miller is confirmed, he will be the first appeals court judge to ascend to the high court without blue slip approvals from the senators who represent his home state. Murray complained prior to the cloture vote that Trump was trying to “steam roll” Miller’s nomination.

The San Francisco-based 9th Circuit has been a liberal bastion in the federal judiciary for decades, with 30 sitting members when at full complement.

The circuit has been a deeply entrenched thorn in Trump’s side throughout his tenure in the Oval Office, regularly ruling against his efforts to strengthen U.S. immigration and border controls.

Trump predicted Democrats would use the 9th Circuit in their efforts to derail his national emergency declaration and plan to divert as much as $8 billion in previously appropriated Department of Defense funds to the construction of a new wall on the U.S. Southern border with Mexico.

Miller’s nomination has been opposed by liberal judicial activist groups, including the Alliance for Justice, which claimed he “has frequently represented powerful corporations fighting the interests of consumers and employees. At the Justice Department, his work as a career attorney included several controversial national security and reproductive rights cases.

“Miller’s personal comments and writings also raise questions about whether he understands the impact of the law on real people, or simply prefers that the law protect the wealthy few. And like many Trump nominees, Miller is a member of and speaker at the extremely conservative Federalist Society.”

Trump has three other 9th Circuit nominations pending, including Daniel Collins, Kenneth Lee, and Daniel Bress. They are hotly opposed by both of California’s senators—Democrats Dianne Feinstein and Kamala Harris, who is an announced candidate for her party’s 2020 presidential nomination.

If any of the trio are confirmed, they would also be without blue slip approvals, in this case from senators representing the state where the 9th Circuit is seated.

Feinstein and Harris issued a Jan. 30 statement condemning Lee for what they claimed were writings displaying “extreme views on a number of important issues like affirmative action and voting rights.”

The two senators also condemned Collins, who they allege “has a history of taking strong litigation positions for no reason other than attempting to overturn precedent and push legal boundaries.”

Feinstein and Harris said they oppose Bress because “he lives in Washington, D.C., not California, is quite young and has no judicial experience.”

Sen. Lindsey Graham (R-S.C.), the current Judiciary Committee chairman, rejected Feinstein and Harris’s criticisms of the three Trump nominees, and stated: “I’m very supportive of the nominees submitted by President Trump to serve on the 9th Circuit Court of Appeals. These are highly qualified nominees and I am hopeful they will receive wide bipartisan support.”