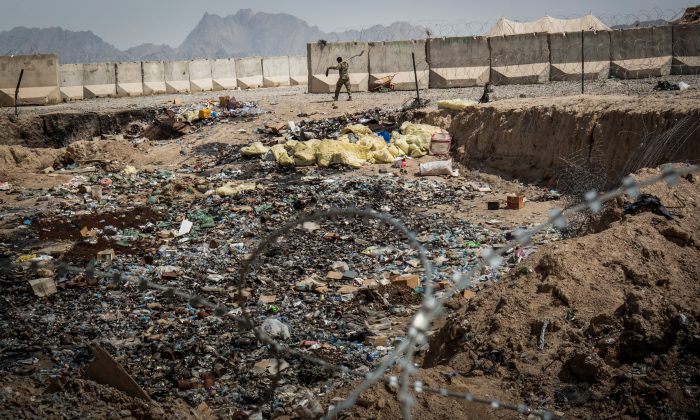 A soldier in the Afghan National Army walks past a burn pit at a command outpost in Kandahar Province, Zhari District, Afghanistan, on March 22, 2013. (Andrew Burton/Getty Images)
National Security

Experts testified at a Senate Armed Services Committee hearing on March 16 about the long-term health effects of exposure to burn pits that used jet fuel to incinerate medical waste, chemicals, human waste, and other trash at U.S. military installations during the First Gulf War and subsequent wars in Iraq and Afghanistan.

The hearing coincided with a new proposal from Sen. Kirsten Gillibrand (D-N.Y.), chair of the SASC’s subcommittee on personnel, that would provide Department of Veterans Affairs (VA) care to U.S. service members with a myriad of serious diseases who worked on bases that used burn pits.

Her proposal, “Presumptive Benefits for War Fighters Exposed to Burn Pits and Other Toxins Act of 2021,” would automatically entitle veterans who served in southwest Asian theaters from 1990 onward to disability benefits if they suffer from various cancers, post-service asthma, chronic obstructive pulmonary disease, emphysema, and other health conditions that have been linked to burn pit exposure.

While other bills to address burn pit victims have been proposed, Gillibrand told The Epoch Times at a March 16 press conference that her proposal is the only one to offer presumptive benefits—meaning veterans wouldn’t have to undergo medical examinations to prove their ailments were related to service.

One of those less expansive bills is the bipartisan Health Care for Burn Pit Veterans Act, which would require the VA to screen veterans for burn pit toxin exposure, establish an outreach program to make contact with such veterans, and notify them of benefits to which they are entitled.

Co-sponsored by the personnel subcommittee’s ranking Republican and the co-leader of the March 16 hearing, Sen. Thom Tillis (R-N.C.), the measure passed the Senate unanimously in February.

A previous version of Gillibrand’s bill was approved by the House on March 3 as part of the Honoring Our Pact Act. It received 256 yeas, including 34 from Republicans, and 174 nays, all from Republicans.

“I think the bill can pass [the Senate] as is if we had an up or down vote today,” Gillibrand told reporters.

The Congressional Budget Office (CBO) estimated that the relevant portion of the House version of Gillibrand’s bill would cost $63.1 billion in direct spending over 10 years, including $15.7 billion for the reevaluation of claims that were previously denied. In addition, it would raise spending subject to appropriation by $18.8 billion.

The VA estimates that roughly 3.5 million post-9/11 veterans may have been exposed to burn pits, and hundreds of thousands of veterans are already on the VA’s burn pit registry.

“That’s why the score is so high. But when I look at this number, it’s the cost of war,” Gillibrand told reporters.

The CBO hasn’t released a cost estimate for Tillis’s bill.

While Gillibrand told reporters at the press conference that “we understand [burn pits are] not being used,” an expert at the hearing offered contradictory information.

“Did they determine that all past burn pits in the last 20 years were operationally necessary?” Gillibrand asked Rauch.

Rauch responded: “Burn pits that were used in the past were used because when you establish a base camp in an immature theater, and each service member in the deployed force is generating 10 or more pounds of waste every day, and you have 300 to 3,000—that’s a lot of daily waste, and we have to manage it somehow.

“In an immature theater, before you can install incinerators or contract to have it removed, burn pits were used.”

Both Gillibrand and Tillis requested additional information on the current use of burn pits.

Sen. Josh Hawley (R-Mo.) asked Rauch what the Pentagon has done to enhance its collection of data that can link a particular disease with airborne toxin exposure.

“It’s a part of the data that we already collect by preventative medicine units and store in our databases, but linking those exposures to illnesses has been somewhat challenging,” Rauch responded.

Capt. Brian Feldman, commander of the U.S. Navy and Marine Corps’ public health center, told the senators that Navy Medicine is conducting research and development on silicone band wearables that soldiers can wear to assess individual-level exposure to toxins.

Tom Porter, executive vice president of government affairs for the Iraq and Afghanistan Veterans of America organization, told senators that he suffered lung damage due to burn pit exposure.

“Before I went downrange, I had completely healthy lungs. Shortly after I arrived in Kabul in 2010, where the air is particularly bad, my lungs had a severe reaction and became infected. It was controlled with medication, but I was diagnosed with asthma as soon as I got back home a year later,” he said.

“I have to still take the medications to keep breathing.”