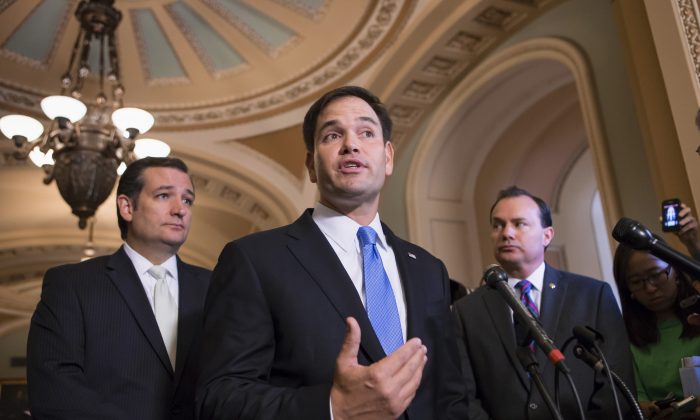 After weeks of strategizing, GOP leaders began rolling out a measure they said would attract the votes needed for approval by week’s end. To achieve that, they balanced victories for some of the most conservative GOP senators with concessions for more moderate Republicans facing competitive 2016 re-elections.

The White House accused Republicans of “refighting old political battles,” a reference to unanimous GOP opposition to the measure ever since Obama began pushing it through Congress and dozens of votes lawmakers have staged to undo the statute.

Repeal would “roll back coverage gains and would cost millions of hard-working families the security of affordable health coverage they deserve,” the White House wrote in its letter pledging a veto.

“This is their chance, and President Obama’s chance, to begin to make amends for the pain and hurt they’ve caused” by the statute, which Republicans blame for rising health care costs.

On Wednesday, a Department of Health and Human Services report said that health care spending grew last year at 5.3 percent, in part because over his law’s coverage expansion and the steepest climb since Obama took office.

The GOP said a veto would only help its presidential and congressional candidates by underscoring that Republican control of the White House and Congress could spell the end of the law they derisively label “Obamacare” and of Planned Parenthood’s federal dollars.

Pleasing conservatives, the measure would all but kill the 2010 Affordable Care Act, effectively ending its requirements that individuals obtain health insurance and that large companies offer coverage to workers by erasing the financial penalties enforcing those obligations.

The bill would repeal the law’s expanded Medicaid coverage for lower-income people and its federal subsidies for those buying policies in insurance marketplaces. It would also annul a slew of tax increases the law imposed to cover its costs, including levies on medical devices, costly insurance policies, investment income of higher-earning people and indoor tanning salons, according to documents obtained by The Associated Press.

For GOP senators facing tough re-election fights, the measure offers some relief: a two-year delay in its repeal of the exchange subsidies and the Medicaid expansion. That would allow Republicans to argue that the bill creates a two-year bridge until the next president takes office and can offer a replacement health care plan. In the five years since the health statute became law, the GOP hasn’t coalesced behind a replacement proposal.

That two-year delay also keeps the impact of those provisions from being felt immediately. That could help GOP senators facing strong re-election challenges in Illinois, New Hampshire, Ohio and Pennsylvania, which are among 30 states that have expanded Medicaid to thousands of voters.

Also included is $1.5 billion over two years for mental health and drug abuse programs. Sen. Rob Portman, R-Ohio, who could face a tough race next year, said that money is “important to me, especially with a heroin epidemic in Ohio.”

Republicans brought the bill to the Senate floor 11 months before an election in which Democrats have a solid chance of retaking the majority of a chamber the GOP controls by 54-46.

Republicans avoided needing 60 votes to overcome Democratic efforts to kill the measure by using a streamlined procedure available for deficit-cutting legislation. But that process has strict rules, including a bar against raising federal deficits, which repealing the entire health law would do because of higher taxes and reduced payments to health care providers the statute imposed.

Yet even getting to 51 votes has been tricky for the GOP, and they have no chance of rallying the two-thirds majority they would need to override a veto.

Sen. Mike Lee, R-Utah, and presidential candidates Marco Rubio of Florida and Ted Cruz of Texas, had warned that a House-approved version of the bill was too weak. Lee said Thursday he supports the measure, saying the bill came as close to repealing the health law as Senate rules allow and “lays the groundwork for Obamacare to be erased from the books altogether.”

On the other end of the party spectrum, moderates including Sens. Mark Kirk of Illinois, who faces re-election in 2016, and Susan Collins of Maine, were concerned about the bill’s Planned Parenthood cuts. The organization has faced Republican attacks this year for providing fetal tissue to researchers.