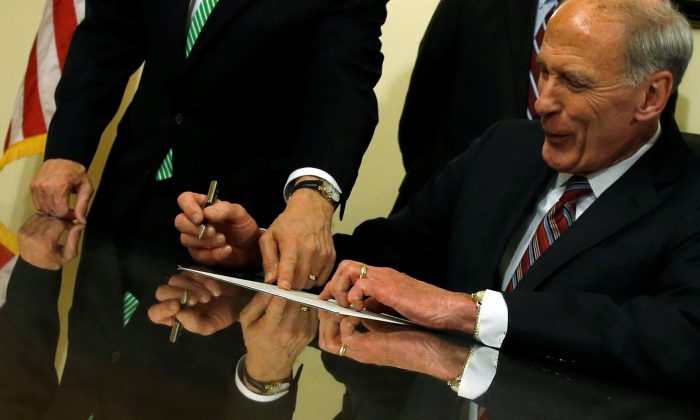 Vice President Mike Pence directs Dan Coats (R) where to sign his affidavit of appointment to serve as U.S. Director of National Intelligence (DNI) for the Trump administration, after swearing him in at the U.S. Capitol in Washington on March 16, 2017. (REUTERS/Jonathan Ernst)
Politics

The vote was 85-12 to confirm Coats, who also served as ambassador to Germany under former President George W. Bush. Fifty-one votes were required for confirmation.

Democratic Senator Ron Wyden had said he would object to Coats’ nomination because he felt the office of the Director of National Intelligence had not provided the committee with enough information about how many Americans’ communication records had been subjected to government surveillance.

McMaster was approved as Trump‘s second national security adviser in an 86-10 vote. No Republican senator voted against him.

McMaster had faced some opposition from Democratic senators who cited concerns about his past decision to allow two service members accused of assault to advance their careers while the case against them was open, in violation of Army regulations.

The Senate does not normally approve a president’s national security adviser but McMaster’s reappointment to his new position had to be considered by the Senate because he is an active-duty military officer.

McMaster, 54, who is known for speaking his mind and challenging his superiors, replaces retired Lieutenant General Michael Flynn, who was resigned as national security adviser on Feb. 13 after reports emerged that he had misled Vice President Mike Pence about speaking to Russia’s ambassador to the United States before Trump took office.

Coats was a member of the Senate’s intelligence committee until he retired from the Senate at the end of last year. He pledged during his confirmation hearing on Feb. 28 to support a thorough investigation into any possible Russian effort to influence the 2016 presidential election.