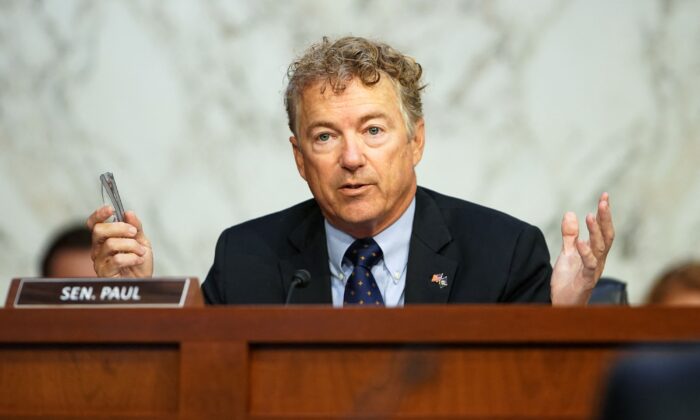 U.S. Senate lawmakers on Wednesday voted against proposed legislation introduced by Senator Rand Paul (R-Ky.) that he said would have balanced the federal budget within five years.

Lawmakers took to the Senate floor to vote on Paul’s “Six Penny Plan” federal budget plan but ultimately rejected the proposal with a vote of 67-to-29.

In a statement following the vote, the Republican lawmaker, who has been critical of excessive government spending, pointed to increasing inflation across the United States which is currently at 40-year-highs.

“Washington’s addiction to spending is hurting our economy and depleting our currency. Inflation is stealing every American’s purchasing power and financial security. And yet, no Democrat or Republican has produced a federal budget; my Six Penny Plan is the only one,” said Paul.

“My plan provides a commonsense solution for fiscal sanity. It puts our nation on track to balance the federal budget in the next five years, and it solves this inflationary and spending crisis that Congress created.”

Under Paul’s plan, which the senator describes as “reasonable and obtainable”, federal spending would be reduced by six cents on the dollar and bought down to pre-pandemic levels.

“If the federal government spent at 2019 levels this year, we would have a $388 billion surplus,” said Paul.

Overall, the plan would yield a $65.8 billion surplus by fiscal year 2027 with cuts across the budget, although that does not include social security, Fox News reports.

Furthermore, federal spending would halt in the fiscal year 2023 at the Congressional Budget Office’s projected baseline level of $5.874 trillion, according to Fox, and would slowly decline each year going forward.

Paul offered his first balanced budget in 2011 and noted that Congress has added nearly $11 trillion to the federal debt since then, while interest payments on the debt have grown by 32 percent, meaning that a simple penny or two is now insufficient to balance.

The lawmaker said that “Congress’s refusal to accept the responsibility to act as good stewards of American taxpayer dollars has caused our bleak financial position.”

“Americans everywhere are feeling the effects of historically high inflation and sustaining labor and supply chain issues,” Paul said. “Short-term political gains of the past, are in fact causing us harm now. Not to our children and grandchildren off in the future, but to us here today.”

The U.S. annual inflation rate surged to 8.6 percent in May as Americans are forking out more on everything from food to energy.

Biden has vowed his administration will “continue to do everything we can to lower prices for the American people” and urged Congress to act fast in passing legislation that will cut the cost of shipping as well energy bills and prescription drugs for families.

The president has placed much of the blame for the current economic situation on Russia’s invasion of Ukraine.

However, the federal deficit has simultaneously increased by $3.4 trillion since Biden took office thanks in part to unprecedented levels of spending during the COVID-19 pandemic.

Paul has introduced near-identical versions of his latest bill in the past but they have failed to pass due to bipartisan opposition among lawmakers.