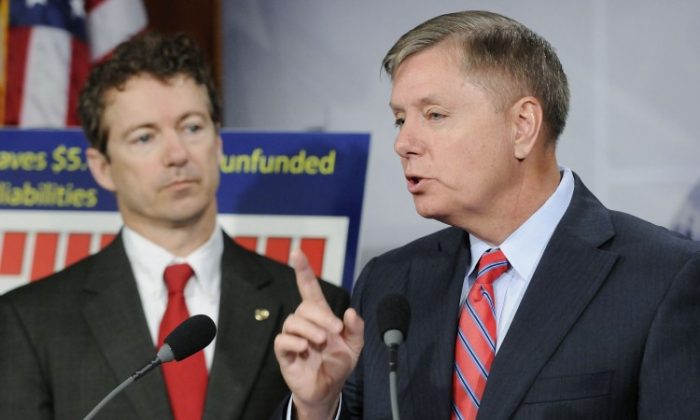 Sen. Rand Paul (R-Ky.) (L) and Sen. Lindsey Graham (R-S.C.) at the U.S. Capitol in this file photo. Graham and other senators voted down on Saturday Paul’s proposal to cut off funding for Pakistan, Libya, and Egypt. (Jonathan Ernst/Getty Images)
US

WASHINGTON—Congress concluded business Saturday until after the Nov. 6 election, but not before passing a bill to prevent a government shutdown come Oct. 1.

A stopgap measure approving the funds for government to function for the next six months was passed in the Senate 62–30, in the early hours of Saturday morning.

The bill, which now goes to President Obama to be signed into law, was delayed until the last minute due to partisan disagreements over other spending bills.

The other bills include: improving cybersecurity for the nation’s critical infrastructure, overhauling the farm bill, and fixing the ailing U.S. Postal Service.

It also puts off until after the election the more contentious debate about expiring Bush tax cuts and sequestration. The Budget Control Act’s sequestration provisions, which come into effect Jan. 1, will require $1.2 trillion in automatic cuts, equally divided between defense and domestic programs over the next decade.

In a rare show of bipartisan agreement, the House of Representatives passed the stopgap bill on Sept. 13, each party delivering a near equal amount of votes resulting in a 329–91 resolution. Seventy Republicans and 21 Democrats opposed the legislation.

The temporary measure, which approves $524 billion in funds for the next six months, allows members of Congress to leave for seven weeks to campaign without another bitter budget fight, and comes just prior to the start of a new fiscal year Oct. 1.

Polarizing party differences over the last two years have resulted in one of the least productive Congresses in U.S. history and a record low job-approval rating.

Senate members approved the budget measure after rejecting a proposal by Sen. Rand Paul, (R-Ky.), to cut aid to Pakistan, Libya, and Egypt in retaliation for the recent violence directed at U.S. embassies.

“We shouldn’t send money to a country that tortures and then is incarcerating the man who helped us get Bin Laden,” he told Wolf Blitzer on CNN, adding, “That’s not the true behavior of a true ally.”

While 10 senators, all Republican, supported Paul’s proposal, the majority rejected it on the ground that halting or slowing aid would reduce U.S. influence in those regions.

“I know that Rand Paul is as patriotic as anybody in this body, but the fact of the matter is the crazy, Islamic extremist terrorists who are trying to kill us would love nothing more than for this to pass,” Sen. Lindsey Graham (R-S.C.), said in the Senate floor debate. “They know they cannot win if we stay engaged in helping people, so they’re trying to drive us out because that’s their best hope of winning the day.”

Paul said he had not expected the proposal to pass, but stood by his position.

“I want to be engaged with Pakistan, I just don’t think bribing works,” he said on CNN.

The Obama administration’s FY2013 budget requests $2.2 billion in aid for Pakistan and S1.56 billion for Egypt, according to a Congressional Research Service report obtained by the Federation of American Scientists and made available by The Huffington Post.

Paul, like his father Texas Rep. Ron Paul, a libertarian candidate who ran for the Republican presidential nominee, is not keen on any type of foreign aid, saying the United States borrows money from places like China only to send it back in the form of aid.

“I think the whole concept is flawed,” he said.

Paul was the only Senate member to oppose a resolution on Iran late Friday night. In a unanimous vote—bar Paul—the Senate approved a non-binding resolution for the United States to pursue a policy other than containment if necessary, to prevent Iran from acquiring nuclear weapons.

Paul argued on the floor that the bill elevates war as an option.

The bill does state, however, in a specific rule: “Nothing in this resolution shall be construed as an authorization for the use of force or a declaration of war.”