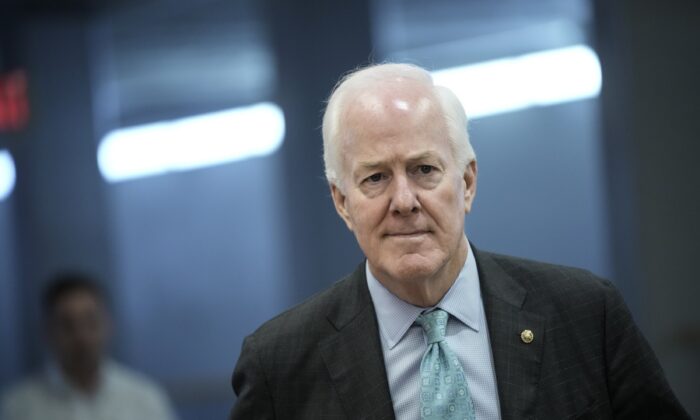 Sen. John Cornyn (R-Texas) walks through the Senate subway on his way to a vote at the U.S. Capitol in Washington on May 27, 2021. (Drew Angerer/Getty Images)
Congress

Senate Approves Bill That Would Make Juneteenth a Federal Holiday

The Senate approved on June 15 a resolution that would add Juneteenth, the day marking the end of slavery in the United States, to the slate of federal holidays. The measure passed with unanimous consent, without a roll call vote or objections from the chamber.

House lawmakers are also expected to approve the bipartisan legislation.

The resolution designates June 19 as “Juneteenth independence day,” in recognition of the same date in 1865. The day, traditionally marked in southern states only, marks when news of the end of slavery reached the slaves in the southwestern states.

Sen. Ted Cruz (R-Texas) described how Union Maj. Gen. Gordon Granger in 1865 delivered the news in Galveston, Texas, that the Civil War was over, and that enslaved people were free, more than two years after President Abraham Lincoln’s Emancipation Proclamation.

“I’m a proud co-sponsor of the Senate resolution designating June 19, 2021, as Juneteenth independence day to honor the historical significance this day has in the United States,” he said.

“Juneteenth is an important day. It’s a somber reminder of the original sin of slavery that our nation inherited from colonial powers. Still, it is also a celebration of the fact that our country strives each and every day to make good on its promise to protect the inalienable right to life, liberty, and the pursuit of happiness for all men and all women who are created equal.”

The previous effort to pass the Juneteenth bill involved no debate or amendments, Johnson said in a statement on June 15.

“Although I strongly support celebrating Emancipation, I objected to the cost and lack of debate. While it still seems strange that having taxpayers provide federal employees paid time off is now required to celebrate the end of slavery, it is clear that there is no appetite in Congress to further discuss the matter. Therefore, I do not intend to object,” he added.

There are currently 10 paid federal holidays.

Sen. John Cornyn (R-Texas), who co-sponsored the bill with Rep. Sheila Jackson Lee (D-Texas), said he was pleased that the Senate passed it.

Juneteenth “has been a state holiday in Texas for more than 40 years,” he said. “Now more than ever, we need to learn from our history and continue to form a more perfect union.”

Lee said she was working to make sure the bill would be passed by the House.

“It has been a long journey! Juneteenth equals freedom and freedom is what America is about!” she wrote in a Twitter post.