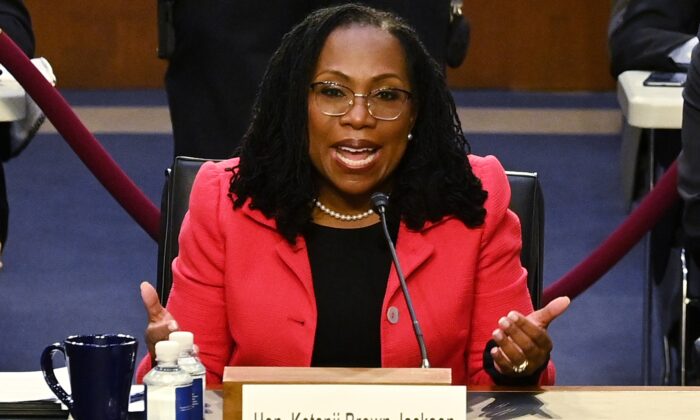 Judge Ketanji Brown Jackson testifies on her nomination to become an Associate Justice of the U.S. Supreme Court during the Senate Judiciary confirmation hearing on Capitol Hill in Washington on March 22, 2022. (Mandel Ngan-Pool/Getty Images)
Congress

The Senate voted to end debate on the nomination of Judge Ketanji Brown Jackson to the Supreme Court on Thursday morning, setting her up for a final confirmation vote in the Senate on Thursday afternoon.

The Senate began open floor debate on Jackson on Tuesday.

All 50 Senate Democrats, in addition to GOP Sens. Mitt Romney (R-Utah), Lisa Murkowski (R-Alaska), and Susan Collins (R-Maine), voted in favor of ending debate, while all other Republicans voted against advancing the nomination, bringing the final tally to a 53-47 vote.

However, not long after Jackson’s hearings ended, Manchin dashed these hopes when he announced that he would support Jackson’s confirmation.

Sinema, who has long refrained from giving her intentions to the press, stayed quiet on how she would vote. But on Thursday she joined Manchin in supporting Jackson’s advancement to a final floor vote.

On March 30, Sen. Collins became the first GOP lawmaker to announce that she would support Jackson’s nomination.

“I have decided to support the confirmation of Judge Jackson to be a member of the Supreme Court,” she told The New York Times. “In recent years, senators on both sides of the aisle have gotten away from what I perceive to be the appropriate process for evaluating judicial nominees.

“In my view, the role under the Constitution assigned to the Senate is to look at the credentials, experience, and qualifications of the nominee. It is not to assess whether a nominee reflects the individual ideology of a senator or would vote exactly as an individual senator would want.

“There can be no question that she is qualified to be a Supreme Court justice.”

Collins was joined in quick succession by Murkowski and Romney, who have long been willing to vote against their party.

“After reviewing Judge Jackson’s record and testimony, I have concluded that she is a well-qualified jurist and a person of honor,” Romney said in a tweet. “While I do not expect to agree with every decision she may make on the Court, I believe that she more than meets the standard of excellence and integrity. I congratulate Judge Jackson on her expected confirmation and look forward to her continued service to our nation.”

Murkowski explained her own defection in a statement: “My support rests on Judge Jackson’s qualifications, which no one questions; her demonstrated judicial independence; her demeanor and temperament; and the important perspective she would bring to the court as a replacement for Justice Breyer.”

The support of the trio all but guaranteed that Jackson’s confirmation would overcome the filibuster threshold.

Republicans have cited concerns that Jackson is soft on crime, and have argued that her judicial philosophy, and how she would vote if sent to the Supreme Court, is too unclear for them to support her.

On March 28, Republicans in the Judiciary Committee made a last-ditch effort to slow Jackson’s confirmation by demanding a one-week hold on the committee vote, citing gaps in Jackson’s record. However, they were not able to hold off the vote indefinitely under Senate rules.

On April 4, the Judiciary Committee held a final vote to move Jackson out of committee. All 11 Judiciary Republicans opposed the move, while all 11 Judiciary Democrats supported it.

Under rules worked out at the beginning of the 117th Congress, the deadlock was broken by a majority vote in the Senate.

Still, despite widespread GOP opposition to Jackson’s nomination, the minority party had few options at their disposal to stop her advancement through the larger Senate.

Before the rules were changed Supreme Court nominees, like most legislation and appointments in the Senate, had to overcome a 60-vote threshold for debate to end and send a bill or nominee to the floor for a final simple majority vote.

Because of the rule change, Jackson only needed 51 votes to break the filibuster.

In a statement on the Senate floor Wednesday night, Senate Majority Leader Chuck Schumer (D-N.Y.) announced that the final vote on Jackson’s confirmation is set to begin around 1:45 p.m. E.T. on Thursday, setting Jackson up for an easy glide to the Supreme Court.