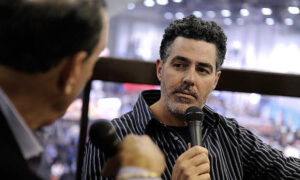 Sen. Tom Cotton: Communist China Waging ‘Undeclared War’ on US and the West

For decades, the Chinese Communist Party has been waging a secret war on the United States. Its tactics range from stealing U.S. intellectual property to gaining control of life-saving drugs.

In this episode, we sit down with Sen. Tom Cotton (R-Ark.), an outspoken critic of the Chinese regime. He serves on the Senate Committee on Armed Services and the Select Committee on Intelligence.

Jan Jekielek: Senator Tom Cotton, so great to have you on American Thought Leaders.

Sen. Tom Cotton: Thank you for having me.

Mr. Jekielek: I was just watching you speaking moments ago, and you talked about how you’d been traveling around the country, and voters had the idea [that] there was something up with China before the leaders did. I’m wondering when did you realize that China was actually a threat under the Chinese Communist Party?

Sen. Cotton: I’ve always recognized China is a threat because communism is a threat wherever you find it. I don’t know if Xi Jinping gets up and reads “Das Kapital” or the other works of Karl Marx, but there’s no doubt that the Chinese Communist Party remains communist through and through. It’s a one-party power structure where they will ruthlessly hold on to power. There’s really no such thing as purely private enterprise in China. It is all state-controlled, sometimes directly state-supported or even owned. And of course, they brutally repress minorities and dissidents of all kinds. That’s all the hallmarks of communism.

I think that people around the country have, for a long time, had a number of beefs with China, whether you look at factory workers whose jobs have been shipped overseas or service members and their families or veterans who worry about China’s aggressive behavior towards our troops and our allies in the Western Pacific. Or you look at Christians or other religious minorities in China or just human rights activists in the West who see the brutal repression of China’s religious and ethnic minorities [and] the forced abortions. Now we see forced sterilizations as well and the gulags which they put minorities for re-education.

This is all before the pandemic. So, China had very few friends out among normal Americans before the pandemic. Now, maybe in Washington or maybe at the heights of business, they had people who saw it differently. But among normal Americans, there’s very little love lost for China. And of course, that’s just fallen even farther since China unleashed this plague on the world.

Mr. Jekielek: Even at this time, there are very high-profile people promoting engagement with China, saying that the U.S. is behaving in an aggressive way, creating a problem where there maybe isn’t going to be one. What are your thoughts on that?

Mr. Jekielek: It’s an interesting time because it does seem like this pandemic—which you’ve been talking about way from the beginning, and we’ve been following that—has really opened up a lot of people’s eyes to the reality of the Chinese Communist Party. Do you see some sort of alliance developing among nations alongside the U.S.?

Sen. Cotton: Well, I don’t think China had many truly friendly partners before the pandemic because no country wants to be a vassal state to China. Many of those countries on China’s periphery have been vassal states in their history. And they remember what it was like, and they don’t want to do it again. But many countries were also fearful of criticizing China in public, sometimes even in private, because they didn’t know who might be listening in.

What I’ve seen over the last couple months, especially since we got past the worst peak of the pandemic, [is] in many places around the world when countries were beginning to reopen their economies, when they had the kind of personal protective equipment and drug stockpiles they needed to no longer be immediately beholden to China for those things, they’re not willing just to criticize China privately, but they’re increasingly willing to do so publicly.

And we want to encourage that coalition to continue to grow because we want more partners. Whether it’s in East Asia, South Asia, Europe, Latin America, or Africa, we want more partners who want to cooperate with the United States. And I would submit the vast majority of them do, almost all of them. They may still be fearful of China, but the vast majority of them know that cooperating with China likely just gets you a lot of debt and loss of sovereignty.

Mr. Jekielek: We pay a lot of attention to hearing what the Chinese Communist Party is saying internally to its people through its propaganda mouthpieces and so forth. Now they’re saying these days, “Prepare for war.” That’s interesting. Do you think kinetic war is a possibility?

Sen. Cotton: I certainly hope not. And that’s one reason why it’s so important that we continue rebuilding our military, that we support our allies in the Western Pacific, like Japan, South Korea, Australia, Taiwan, the Indian Ocean as well, like India. It’s also important that we stand up to all of China’s malign activities on other fronts as well, whether it’s stealing our technology or forcing companies in China to transfer technology to them, breaking their commitments to the people of Hong Kong and the international order, violating Hong Kong sovereignty and autonomy.

It’s important that we demonstrate that we will not tolerate this kind of non-military aggression. So, they don’t move into thinking that they could actually get away with military aggression, with invading Taiwan or going into a much more open conflict than what they’re already facing with India. We have to be very clear with China. Not only will we never tolerate that, but we won’t tolerate all the steps that might lead up to that and that would encourage them to miscalculate.

Mr. Jekielek: We recently heard Secretary Pompeo follow up a series of other speeches by Attorney General William Barr, FBI Director Christopher Wray and National Security Advisor Robert O’Brien. This is a much tougher stance on China than we’ve ever seen that I’m aware of. Is this something that is unique to this administration, do you think, or something that can span beyond that?

Sen. Cotton: I think one of the big changes coming out of the Trump presidency, hopefully five years from now, will be a new posture towards China. There are plenty of Democrats that have no love lost for China. A lot of Democrats come out of the traditional trade union background, and those were the Americans who felt some of the first loss by our relationship with China over the last 30 years. I work with plenty of Democrats in Congress that are actually tougher on China than some Republicans are.

But I think the President has helped open the eyes of some elected Republicans that maybe there was a gap between their views of China and their voters’ views of China. That gap is increasingly closed now. So, I believe whatever happens in this election, whatever happens four years from this election, a tougher posture towards China and the Chinese threat to America will actually be a lasting legacy of the Trump administration’s foreign policy.

Mr. Jekielek: I was just thinking to your point, Speaker Pelosi has actually been tough on China for 20 years, against MFN [most-favored-nation] status and so forth. So, there’s a number of people out there. You have a number of pieces of legislation that you’ve even begun around the China issue. One of them has to do with protecting the supply chain around pharmaceuticals. I happen to believe that that’s one of the biggest places of exposure that the U.S. has. I wanted to get your perspective. What are the big areas of exposure that the US needs to shore up in this battle?

Sen. Cotton: So that’s one example. I mean, most Americans were shocked to learn earlier this year that some of our most basic pharmaceuticals, things like ibuprofen and penicillin, were made predominantly, if not almost exclusively, in China. We just can’t continue to tolerate that. And we get some of those drugs as well from advanced industrial democracies, like Japan or Australia or Denmark, so you can’t tell me that we can’t make them in a cost-effective fashion here in the United States.

It’s vital that we bring pharmaceutical manufacturing back to the United States. So, what I’ve proposed is to encourage manufacturing here through a combination of incentives on the supply side but also on the demand side by requiring the Department of Defense, the VA, Medicare, and Medicaid to purchase American drugs. They certainly don’t purchase Chinese drugs, and then we just cut China off from that market.

… In the Cold War, we would never have allowed the Soviet Union or a communist nation to build our nuclear submarines or missiles. So why, in the information age, would we allow this kind of advanced manufacturing capacity to be based in China, whether it’s pharmaceuticals or semiconductors or telecom or cutting-edge computing, like quantum computing and artificial intelligence? That’s not just vital for our economic prosperity; we can now see it’s vital for our security, our health and our security from a military standpoint. So, it’s essential that we are no longer dependent on China for so many of these vital goods.

Mr. Jekielek: So, in this upcoming relief bill, there’s apparently certain pro-growth elements that are going to be in there. Does any of this have to do with bringing back supply chains and manufacturing? Can you give us a bit of a preview here?

Sen. Cotton: Well, as we sit here, we haven’t released the bill yet. So I don’t want to speculate about its final form or certainly what form it will take after we negotiate at some length with the House Democrats, but I think that it would be good to include such measures in this bill. Look, I don’t want it to be a so-called Christmas tree bill where people are putting on their pet projects. But this is not an unrelated matter. It goes to the heart of what happened here, which is [that] China unleashed a pandemic on the world, and we can no longer be dependent on China for things like medical equipment or pharmaceuticals. And that would actually be pro-growth, as you say, and creating more jobs and more manufacturing capacity here in the United States.

So, I think this would be a very timely and sensible piece of legislation to include some of those measures. Now, if it’s not [so comprehensive], we’re working to include some of them on the defense bill we passed last week as well or to get votes independently on them, but I think we’re going to make progress on it this Congress.

Mr. Jekielek: Any final words before we finish up?

Sen. Cotton: No, just thank you for having me.

Mr. Jekielek: Such a pleasure to have you.

American Thought Leaders is an Epoch Times show available on YouTube, Facebook, and The Epoch Times website. It airs on Verizon Fios TV and Frontier Fios on Channel 158 every Monday and Wednesday at 7:30pm ET and Saturday at 10:30am ET.