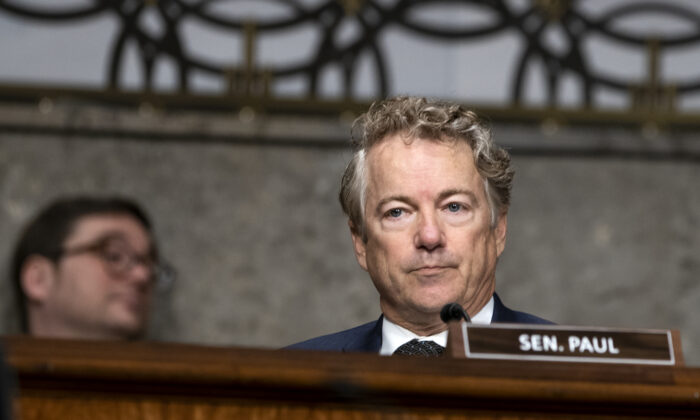 Sen. Rand Paul (R-Ky.) asserted this week that the Senate rejected his bid to “reaffirm the Constitution” regarding declarations of war.

Paul proposed an amendment in the Senate Foreign Relations Committee, chaired by Sen. Bob Menendez (D-N.J.), that would emphasize that only Congress can declare war under the Constitution.

That amendment was submitted in the context of a bill that affirmed a resolution to allow Sweden and Finland to join NATO. Paul was the only member to not vote “yes” on the measure, voting “present” instead.

“Shockingly, the Senate Foreign Relations Committee just rejected my attempt to reaffirm the Constitution. All my amendment said was NATO obligations don’t supersede the constitutional requirement that Congress declare war. How is this controversial?” Paul wrote on Twitter.

Paul, who has long been critical of the United States’ war efforts abroad, has long attempted to, in his words, return war powers to Congress. In 2017, the Senate voted down Paul’s amendment that would force Congress to pass a new law authorizing the United States to wage war against ISIS and other overseas entities.

After the NATO resolution vote Tuesday, Menendez said in a statement “as U.S. foreign policy priorities evolve to account for a changing world, what is self-evident is the future of the transatlantic partnership will be even more intertwined and integrated” amid the Russia-Ukraine conflict.

Several months ago, the leaders of Sweden and Finland signaled their nations are seeking to join the 27-nation military alliance after Russia invaded Ukraine. Finland shares a lengthy border with Russia, while Sweden has a maritime border with the country.

Moscow, meanwhile, has warned both Finland and Sweden against joining NATO, saying it will lead to future conflicts. For more than a decade, Russia’s leadership has accused NATO of continuing to expand eastward and said that Ukraine’s close relations with the bloc, in part, triggered the invasion.

Russian President Vladimir Putin on June 30 warned that Russia will respond if NATO sets up infrastructure in Sweden and Finland if they join the alliance. The two countries’ relations with Moscow would sour over their relationship, he added.

“With Sweden and Finland, we don’t have the problems that we have with Ukraine. They want to join NATO, go ahead,” Putin said. “But they must understand there was no threat before, while now, if military contingents and infrastructure are deployed there, we will have to respond in kind and create the same threats for the territories from which threats towards us are created.”

The Epoch Times has contacted the Senate Foreign Relations Committee for comment.