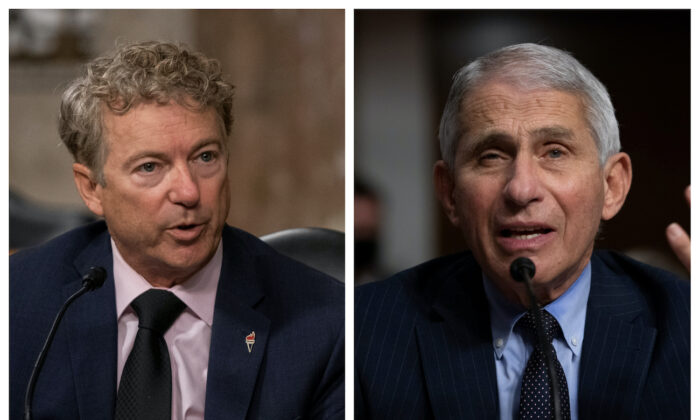 Sen. Rand Paul (R-Ky.) said he plans to issue a subpoena for COVID-19 adviser Anthony Fauci’s records if Republicans recapture the Senate in the 2022 midterms and if he is named the head of a committee.

Paul, who is a physician, could become the chairman of the Senate Health Committee should the GOP flip the 50–50 Senate. Sen. Richard Burr (R-N.C.), the ranking member of the committee, is retiring at the end of his term.

“If we win in November, if I’m chairman of a committee, if I have subpoena power, we’ll go after every one of [Fauci’s] records,” Paul told podcaster Lisa Boothe. “We’ll have an investigator go through this piece-by-piece because we don’t need this to happen again.”

During Senate hearings on the federal government’s COVID-19 response, Fauci and Paul have clashed over vaccines, masks, and the origins of COVID-19.

Paul has said that he believes Fauci and the National Institutes of Health (NIH) sent funding to a virology lab in Wuhan, China, located near the first reported outbreak of COVID-19. New emails published last month suggest Fauci was told privately by key scientists that it is “highly unlikely” that COVID-19 had a natural origin.

And before that, emails showed that British zoologist Peter Daszak, whose EcoHealth Alliance received federal funding to study bat coronaviruses at the Wuhan Institute of Virology, thanked Fauci.

“I just wanted to say a personal thank you on behalf of our staff and collaborators, for publicly standing up and stating that the scientific evidence supports a natural origin for COVID-19 from a bat-to-human spillover, not a lab release from the Wuhan Institute of Virology,” Daszak told Fauci, the head of the National Institute of Allergy and Infectious Diseases.

Fauci has denied in hearings that U.S. funding was for “gain of function” research, or studies into making diseases more contagious.

“And yet when people talk about gain of function, they make that implication which I think is unconscionable to do, to say, well, maybe that research led to SARS-CoV-2,” Fauci said during an October 2021 interview with ABC News, referring to another name for the CCP virus. “So, things are getting conflated, George, that should not be conflated.”

So far, the origin of the virus has not been established. Some U.S. intelligence officials, however, believe that it may have leaked from the Wuhan lab, while some do not subscribe to that theory.

They cited the Chinese Communist Party’s (CCP) unwillingness to cooperate in an investigation into COVID-19’s origins.

“China’s cooperation most likely would be needed to reach a conclusive assessment of the origins of COVID-19,” a report from the U.S. intelligence community, published last summer, reads in part. “Beijing, however, continues to hinder the global investigation, resist sharing information and blame(s) other countries, including the United States.