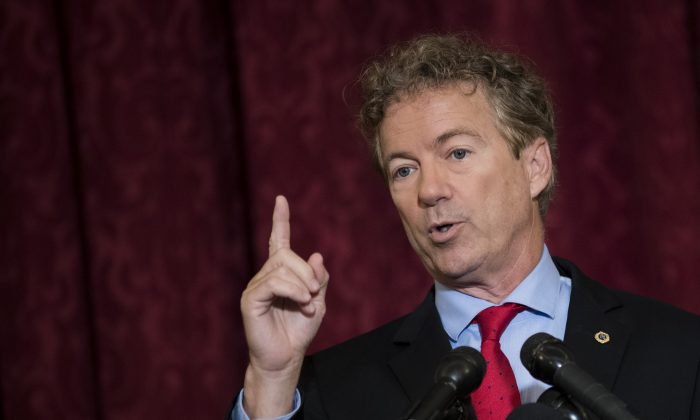 “And the fact that people with security clearances are making these baseless charges provides inappropriate legitimacy to accusations with zero evidence.”

Sanders made the comments in response to a question about Sen. Rand Paul (R-Ky.)’s plan to ask President Donald Trump to revoke the security clearance of former CIA chief John Brennan.

“Is John Brennan monetizing his security clearance? Is John Brennan making millions of dollars divulging secrets to the mainstream media with his attacks on [Trump]?” Paul wrote on Twitter.

Is John Brennan monetizing his security clearance? Is John Brennan making millions of dollars divulging secrets to the mainstream media with his attacks on @realDonaldTrump ?

After finishing his tenure as CIA director, Brennan became a senior national security and intelligence analyst for NBC News and MSNBC. Clapper and Hayden took on analyst positions with CNN in a similar fashion. The trio regularly uses airtime to criticize the president. Comey and Rice also regularly attack Trump.

Trump pointed out that Brennan and Clapper both went on to work for media and are “probably getting paid a lot of money by” television networks.

Paul’s disclosure of his plan to ask about removing Brennan’s security clearance came just days after he blasted the former CIA chief for attacking Trump over the Helsinki summit with Russian President Vladimir Putin. Brennan had called Trump’s performance “nothing short of treasonous.”

In an appearance on Fox News’ “America’s Newsroom,” Paul described Brennan as “the most biased, bigoted, over-the-top, hyperbolic, sort of unhinged director of the CIA we have ever had.”

Paul found that it “really is an insult to everything about our government to call the president treasonous because [Brennan] doesn’t like him.”

In a July 16 interview with Fox News on the heels of the summit with Putin, Trump described Brennan as a “very bad person.”

“I think Brennan is a very bad guy, and if you look at it, a lot of things happened under his watch,” Trump told Tucker Carlson. “I think he’s a very bad person.”

Brennan played a key role in creating the narrative that the Trump campaign colluded with Russia.

In testimony before the House intelligence committee last year, Brennan insisted that a Clinton-funded opposition research dossier was not used to form the Intelligence Community assessment (ICA) on Russian interference. The ICA was released two weeks before Trump’s inauguration in January 2017 and forms the core of the allegations that Russia interfered in the presidential election to help Trump win.

But two key intelligence executives who signed off on the dossier now challenge Brennan’s account.

In a March 2018 letter to House Intelligence Committee Chairman Devin Nunes, Adm. Mike Rogers, the director of the NSA at the time when the ICA was drafted, wrote that the Clinton-funded dossier was used to inform the assessment, according to Real Clear Investigations. Rogers told Congress last year that he disagreed with the assessment that the Russians interfered to help Trump.

In October 2017, James Clapper, the director of national intelligence who led the creation of the ICA, admitted to CNN that “some of the substantive content of the dossier” was included in the assessment.

The dossier was funded by the Clinton campaign and the Democratic National Committee indirectly through a law firm. Former British spy Christopher Steele compiled the document using second-hand sources with ties to the Kremlin.

Officials at the FBI used the dossier to obtain a Foreign Intelligence Surveillance Act (FISA) warrant to surveil former Trump campaign volunteer Carter Page. The Justice Department declassified the FISA warrant applications on July 21. The documents showed that FBI officials failed to disclose to the secret court that the dossier was funded by the Clinton campaign.

In discussing the FISA document revelations, Sen. Bob Goodlatte (R-Va.) said on July 22 that the Senate judiciary committee intends to call on Brennan to testify.

“This is an extremely disturbing thing to see both he and [former FBI Director] James Comey, supposedly impartial government officials, carrying out their jobs in very important areas in intelligence-gathering and law enforcement, expressing the kind of extreme bias that they have shown now, which I think reflects quite accurately on what they were doing back in 2016,” Goodlatte told Fox News.