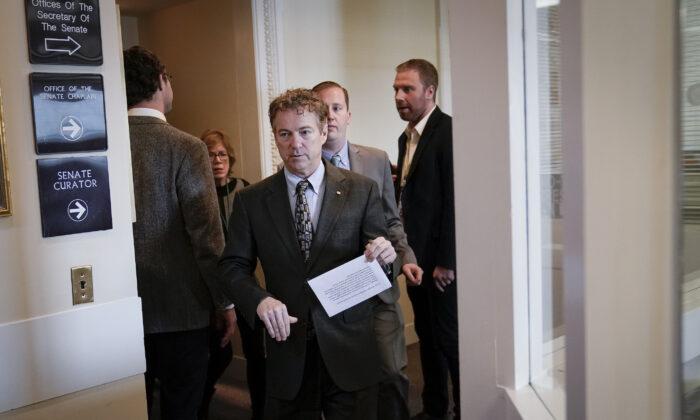 Sen. Rand Paul (R-Ky.) on Feb. 4 posed a question in the Senate that Chief Justice John Roberts refused to read out loud last week in the chamber during the impeachment trial of President Donald Trump.

In his question, Paul named a former National Security Council official widely alleged to have been the whistleblower regarding a phone call between Trump and his Ukrainian counterpart Volodymyr Zelensky, which ultimately led to the president’s impeachment in the House.

The president is expected to be acquitted on Feb. 5 by the Senate of the two charges brought by the House.

“In fact, as you look at the way it unfolded, they admitted as much. As the impeachment proceedings unfolded, they said we didn’t have time for witnesses, we had to get it done before Christmas because we wanted it done and ready to go for the election,” Paul said.

According to Paul, in his Senate speech, the attacks against Trump began “six months before he was elected.”

In his speech, Paul used a visual display stating his earlier question that had been rejected by Roberts, who was serving as the presiding officer in the impeachment trial.

“Manager Schiff and Counsel for the President, are you aware that the House Intelligence Committee staffer Shawn Misko had a close relationship with Eric Ciaramella when at the National Security Council together, and are you aware and how do you respond to reports that Ciaramella and Misko may have worked together to plot impeaching the President before there were formal House impeachment proceedings?”

Paul was widely criticized for allegedly outing the whistleblower in his question. Paul, however, said that his disallowed question didn’t “talk about anybody who was a whistleblower.”

“It did not make a statement believing there was someone who was the whistleblower. I simply named two people’s names. Because I think it’s very important to know what happened,” Paul said.

The senator also questioned why he was unable to ask the question, as there had been no official confirmation of the whistleblower’s identity and Paul’s question didn’t claim that Ciaramella was the whistleblower. Additionally, Rep. Adam Schiff (D-Calif.), one of the impeachment managers, who, along with President Trump’s counsel, claimed not to know the identity of the whistleblower.

At the same time, Paul noted that, based on his refusal to read his earlier question, it seemed apparent that Roberts did know who the whistleblower was.

According to Paul, there are “news reports saying these two people, one of them who works for Adam Schiff and one of them who worked with this person at the National Security Council, that they knew each other and had been overheard talking about impeaching the president in the first month of his office—in January of 2017, they were already plotting the impeachment.”

Paul also questioned the use of the whistleblower statute in this particular case, noting that, “if six people, who all worked together at the National Security Council, knew each other and gamed the system—knowing that they would get these protections—they gamed the system in order to try to bring down the president, we should know about that.

“If they had extreme bias going into the impeachment, we should know about that. I think the question is an important one and I think we should still get to the bottom of it. Were people plotting to bring down the president.”

Alexander Vindman, who serves on the National Security Council, testified against Trump during the House impeachment proceedings.

“By having such protection, such overzealous protection, we don’t get to the root of the matter of how this started,”  Paul said. “Because this could happen again. When the institution of the bureaucracy, when the intelligence community—with all the power to listen to every phone conversation you have—has political bias and can game the system to go after you, that’s a real worry.”

Paul says the impeachment trial of President Trump is a culmination of a series of other failed events.

“For the first time, it’s not just American civil liberties that are being abused by our intelligence agencies, it’s an entire presidential campaign. … this is why you want to limit power,” Paul, a longtime critic of the FISA Court and government surveillance, noted.

He also called out the surveillance warrants issued against Trump campaign adviser Carter Page by the FISA Court.

“We had something truly devastating to our republic happen. We had, for the first time in our history, a secret court decide to investigate a campaign.”

Paul noted that the FISA Court has subsequently admitted that they were “lied to” regarding those warrants, and stated that the “FBI has now been proven to have lied 17 times.”

As previously reported, a declassified Jan. 7 order released by Presiding FISA Court Judge James Boasberg, revealed that the Department of Justice (DOJ) has determined that two of the four FISA surveillance applications on Page were “not valid.”

The FISA Court wrote that it had received notice of “material misstatements and omissions” in the Foreign Intelligence Surveillance Act (FISA) applications made on Page, apparently with respect to the final two FISA renewals. The court also noted that the DOJ had made the assessment that regarding the two applications, “there was insufficient predication to establish probable cause to believe that [Carter] Page was acting as an agent of a foreign power.”

Additionally, a Dec. 2019 report released by DOJ Inspector General Michael Horowitz provides further support for Paul’s claims by identifying “at least 17 significant errors or omissions in the Page FISA applications, and many additional errors in the Woods Procedures.” Horowitz noted that “these errors and omissions resulted from case agents providing wrong or incomplete information to the OI (Office of Intelligence) and failing to flag important issues for discussion.”

The IG report highlighted the material failures of FBI leadership—“not only the operational team, but also of the managers and supervisors, including senior officials, in the chain of command”—with regard to the FISA warrant application on Page.

Paul noted that we have “half-a-dozen people at the top level of our intelligence community who have admitted to having extreme bias,” and then mentioned some of the texts between former FBI Agent Strzok and former FBI lawyer Lisa Page, including their infamous “insurance policy” text, which was sent on Aug. 15, 2016, and read: “I want to believe the path you threw out in [former FBI Deputy Director Andrew McCabe’s] office — that there’s no way he gets elected — but I’m afraid we can’t take the risk. It’s like an insurance policy in the unlikely event you die before you’re 40.”

Paul said, “You remember James Clapper, the one who came to the Senate, and when asked by Senator Wyden, ‘Are you storing, are you gathering, information from Americans by the millions and storing it on government computers,’ James Clapper said ‘no.’ He lied to Congress.

“We’re now finding out that the FISA investigation was predicated upon 17 lies by the FBI, by people at high levels who were biased against the president. And it turns out it was an illegitimate investigation. Everything they did about investigating the president was untrue, and abused government to do something they never should have done in the first place.”

Paul says the FISA Court should be restricted from “ever investigating campaigns,” and noted that regular courts should be used instead—and only in “extraordinary” circumstances.