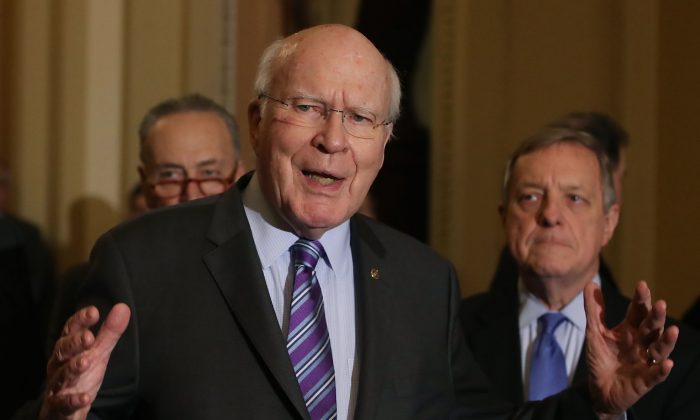 Sen. Leahy, Longest-Serving Senator, Not Running for Another Term

Sen. Patrick Leahy (D-Vt.), the current president pro tempore of the Senate and a prominent Democratic leader, has announced that he’ll retire in 2022, joining a growing list of Democratic retirees in the narrowly controlled House and Senate.

Leahy is currently the Senate’s most senior member, having first been elected in 1974 as a so-called Watergate Baby following the revelations surrounding the Watergate scandal under President Richard Nixon. The revelations set off a chain of Republican losses in the 1974 midterms, allowing Leahy to begin his 48 years in office.

Announcing his retirement in a speech on the floor of the Vermont State House, Leahy reflected on his original reason for joining the Senate.

“What propelled me was a belief that I understood the needs and values of Vermont and thought it was time for a new generation to address them,” he said.

He also noted that Edmund Burke, a Dublin-born Whig party member who served in the English Parliament through much of the 18th century, acted as a “North Star” for him during his time in Congress.

“[Burke] said, ‘Your representative owes you not his industry only, but his judgment,'” Leahy said. “Burke also said that a representative ‘ought not sacrifice to you’ his ‘conscience.'”

Since the beginning of his career, Leahy has sometimes broken with the wishes of his constituents, following Burke’s advice. One such incident related by the senator involved the Vietnam War.

“In Vermont … support for the war was strong,” he said. “I had always opposed it.”

After Leahy took office, Congress was faced with a measure to reauthorize the Vietnam War. This measure, with his no vote, was defeated by a single vote.

Leahy said that one of his major victories on the committee was the establishment of national standards for labeling a food product as “organic.” He applauded that legislation for “helping to launch an organic farm sector that now is a $55 billion a year industry and an important new avenue for Vermont’s farmers.”

Summarizing his time on the committee, Leahy said: “Open land. Cleaner water. New markets for our farmers. Providing nutritious food for those in need. That will be a legacy to our state for generations.”

He would also eventually join the Senate Judiciary Committee, serving as the committee’s chair or ranking minority member for 20 years.

“My oath was to protect the Constitution, and I fiercely defended our civil liberties, the First Amendment, our right to privacy, and the free flow of information from the government to the people it represents,” Leahy said of his long work on that committee.

“Serving on the Judiciary Committee also meant being there at times of crisis, such as the attacks on 9/11. We not only had to protect our nation from outside threats, but from a zealous administration that advocated some of the most serious rollbacks of basic civil liberties.”

However, Leahy didn’t vote against the so-called Patriot Act in the aftermath of the Sept. 11 attacks. The measure would become controversial to many Americans who alleged that it violated the basic liberties in the Bill of Rights.

Concluding his speech to Vermont lawmakers by announcing his retirement.

“I will tell my fellow senators that I will not be on the ballot next year. I will not run for reelection,” Leahy said.

He said he decided to announce his retirement in the Vermont State House first because it was “home.”

“It is important to me to announce that here at home, just a few yards from where I grew up as a child in Montpelier,” he said.

With his announcement, Leahy joins a growing list of Democrats that have announced their plans to retire ahead of a tough midterm election season.