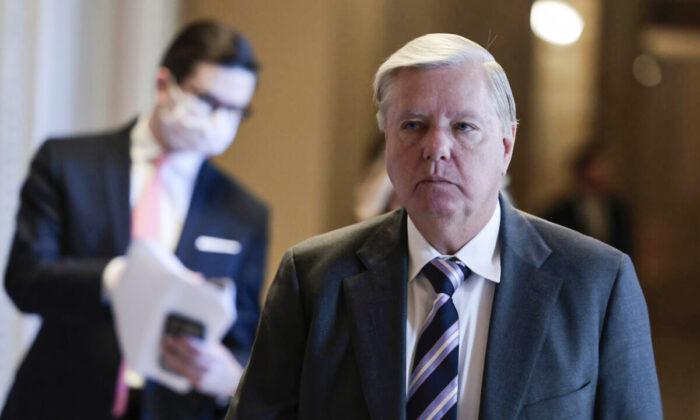 Sen. Lindsey Graham (R-S.C.) is urging retired and former service members to voluntarily help bolster security in schools across the United States in the wake of the mass shooting at Robb Elementary in Uvalde, Texas.

“We have hundreds of thousands of well-trained former military members who could bring a lot to the table in terms of school security. ROTC instructors with firearms training should be allowed to possess weapons to enhance school security,” Graham wrote.

The South Carolina lawmaker said he’s working on creating a “certification process” that will allow former military members to go through school security training and then make themselves voluntarily available at school districts throughout the country.

Graham did not provide further details as to exactly how the voluntary program or certification process would work. The Epoch Times has contacted his office for comment.

“It is time to mobilize our retired and former service members who are willing to help secure our schools,” Graham added in a follow-up post. “Our schools are soft targets. They contain our most valuable possession—our children, the future of our country—and must be protected.”

“Schools should be treated like courthouses, banks, capital buildings, etc. when it comes to security,” he added.

Graham is one of five Republicans in talks with Democrats on bipartisan gun safety legislation in response to a series of shootings nationwide, including the Uvalde massacre of 19 children and two teachers, and a Buffalo supermarket incident in which 18-year-old Payton Gendron gunned down 10 people.

The latest incidents have reignited talks on gun safety issues as some Democrats call for tighter restrictions surrounding purchasing and possessing guns, while Republicans say such restrictions would infringe on the Second Amendment rights of Americans.

On Thursday, President Joe Biden urged Congress to ban yet-to-be-defined assault weapons and “high-capacity” magazines that hold more than 10 rounds, and strengthen laws that limit the use of guns in the wake of mass shootings.

“We need to ban assault weapons and high capacity magazines. And if we can’t ban assault weapons, then we should raise the age to purchase them from 18 to 21; strengthen background checks; enact safe storage law and red flag laws; repeal the immunity that protects gun manufacturers from liability; address the mental health crisis, deepening the trauma of gun violence,” Biden said from the White House.

“I want to be very clear–this is not about taking away anyone’s guns, it is not about vilifying gun owners,” Biden added.

In response, Rep. Marjorie Taylor Greene (R-Ga.) wrote on Twitter, “Biden wants to ban ‘assault weapons’ and ‘high capacity magazines’ yet Democrats refuse to prosecute violent crimes in Democrat cities all over the country, and refuse to protect your children at school with armed security. Same Democrats are protected by armed guards daily.”

Meanwhile, Rep. Greg Steube (R-Fla.)  told “Tucker Carlson Tonight” on Thursday that such a magazine ban would effectively ban “all of these handguns that millions, hundreds of millions of Americans use every single day to defend themselves, [their] families, to protect their homesteads.”

While lawmakers across the country debate stricter gun laws, New York’s legislature last week voted to pass a number of bills aimed at strengthening gun safety laws, including raising the minimum age at which an individual can purchase or possess a semiautomatic rifle from 18 to 21.