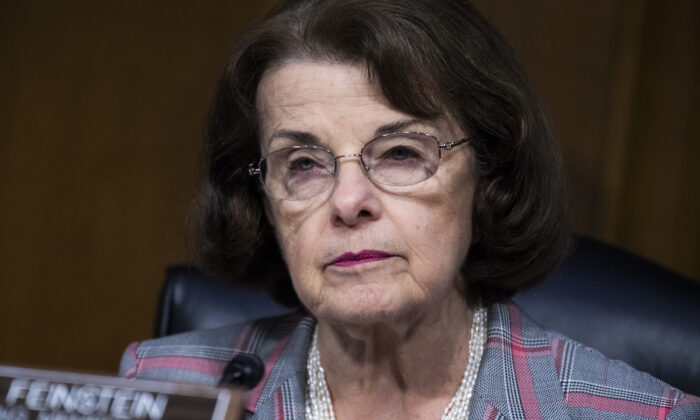 Sen. Dianne Feinstein (D-Calif.) on March 19 said she is “open” to changing the way the Senate filibuster rules are used amid growing pressure from far-left progressive groups for it to be scrapped.

Feinstein, 87, the oldest senator, has long been one of the Senate’s staunchest supporters of the filibuster rule, which requires a threshold of 60 votes to pass major legislation.

In a statement on Friday, Feinstein said she would be open to reforms if needed to pass bills on Democratic priorities such as gun control and violence against women, and noted that it could prove to be an effective solution to Republicans potentially “abusing” the rule by blocking the recent bills and other legislation that she had “tried for years to pass.”

“There are many significant issues Congress needs to address. Just this week we saw a union of gun violence, violence against women, and hate crimes in the tragic shootings in Atlanta,” Feinstein wrote in a statement.

“I have tried for years to pass legislation in these areas. This month the House passed bills to improve background checks for gun purchases and reauthorize the Violence Against Women Act, among other key legislation.”

“Ideally the Senate can reach bipartisan agreement on those issues, as well as on a voting rights bill. But if that proves impossible and Republicans continue to abuse the filibuster by requiring cloture votes, I’m open to changing the way the Senate filibuster rules are used,” she added.

While a number of Democrats, such as moderate Sen. Joe Manchin (D-W.Va.), and Kyrsten Sinema (D-Ariz.) are in favor of keeping the legislative filibuster, far-left progressive groups are pushing for it to be scrapped.

Feinstein noted that President Joe Biden, who previously served in the Senate, had recently signaled that he backs changing rather than eliminating the filibuster rule and endorses the return of the “talking filibuster,” which has been backed by a number of Democrats.

“President Biden this week suggested returning to a talking filibuster so opponents of a bill must speak on the Senate floor and explain their opposition. That is an idea worth discussing,” Feinstein wrote.

“I don’t want to turn away from Senate traditions, but I also don’t believe one party should be able to prevent votes on important bills by abusing the filibuster.”

Progressive groups Indivisible and Courage California have spearheaded a campaign to put pressure on Feinstein to back the effort to scrap the filibuster so that the Senate can pass the sprawling H.R. 1 bill.

The bill is unlikely to go anywhere in the Senate without earning the required Republican support needed to pass under current rules.