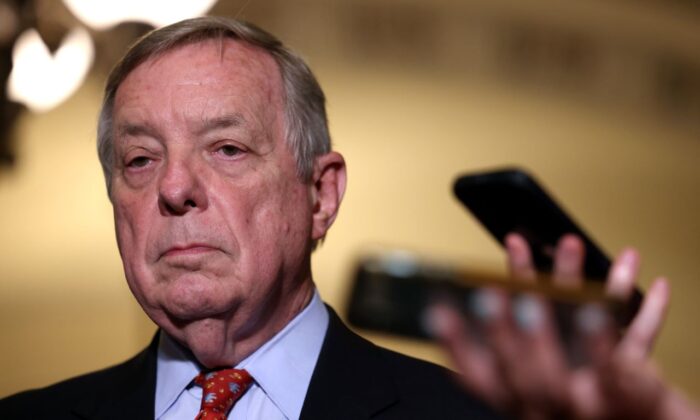 Sen. Durbin Says Republicans Will Meet With Biden’s Supreme Court Pick and ‘Get to Know Them’

Republicans will be able to meet with President Joe Biden’s nominee to the Supreme Court and “get to know them,” Senate Judiciary Committee Chair Dick Durbin (D-Ill.) has said.

Speaking on ABC’s “This Week,” Durbin also noted that he is “hopeful” that whoever is nominated to the position will receive bipartisan support.

“I’m reaching out to the Republicans and saying the nominee will be available for you to get to know them,” Durbin said, stressing that he is optimistic that some GOP members of Congress will ultimately support Biden’s nominee.

That is despite some Republicans expressing concerns that the candidate put forward by Biden will serve to please the progressive branch of the Democratic Party.

Others have also expressed concerns over Biden’s pledge to fill the Supreme Court vacancy with a black woman, with Ward Connerly, a civil rights leader and prominent opponent of affirmative action, saying that the move “suggests to me that our dear president just doesn’t get it. He is living in the 1960s.”

Former U.S. Ambassador to the United Nations Nikki Haley has also said that it would be preferable if Biden’s Supreme Court nominee were “qualified without a race/gender litmus test.”

“That’s what I did when I picked Tim Scott as Senator of South Carolina,” Haley wrote on Twitter.

Supreme Court Justice Stephen Breyer, 83, officially announced his retirement on Jan. 27 after serving in the role for more than 30 years.

In a letter to Biden, Breyer said that he wants the decision to take effect when the court takes its summer recess, which typically happens in late June or early July, assuming that his successor has been nominated and confirmed by that time.

Since that announcement, Biden has vowed to appoint the first-ever black woman to the U.S. Supreme Court by the end of February.

“While I’ve been studying candidates’ backgrounds and writings, I’ve made no decision but one,” Biden said on Thursday. “The person I nominate will be somebody with extraordinary qualifications, character, experience, and integrity, and that person will be the first black woman ever nominated to the United States Supreme Court. It’s long overdue in my opinion.”

A number of women are now being considered for the role, including J. Michelle Childs, who is currently a judge for the U.S. District Court for the District of South Carolina, having been nominated for the role by former President Barack Obama.

Biden, a Democrat, nominated Childs, 55, in December 2021 to serve on the U.S. Court of Appeals for the District of Columbia Circuit although this has not yet been confirmed.

Due to the possibility that she may well be Biden’s Supreme Court nominee, a confirmation hearing that had been scheduled before the Senate Judiciary Committee has since been postponed, Andrew Bates, a White House spokesman, told media outlets in a Jan. 28 statement.

Bates said that Childs is “among multiple individuals under consideration for the Supreme Court, and we are not going to move her nomination on the Court of Appeals while the President is considering her for this vacancy.”

Ketanji Brown Jackson, 51, a former Breyer clerk who worked at the U.S. Sentencing Commission is also reportedly being considered for the role.

Jackson has been a federal trial court judge since 2013 in the District of Columbia and met with Biden personally when he interviewed her for her current post as an appeals court judge in the D.C. circuit.

Addressing the concerns about Biden’s decision to select a black female to replace Breyer, Durbin when speaking to ABC, pointed to “history.”