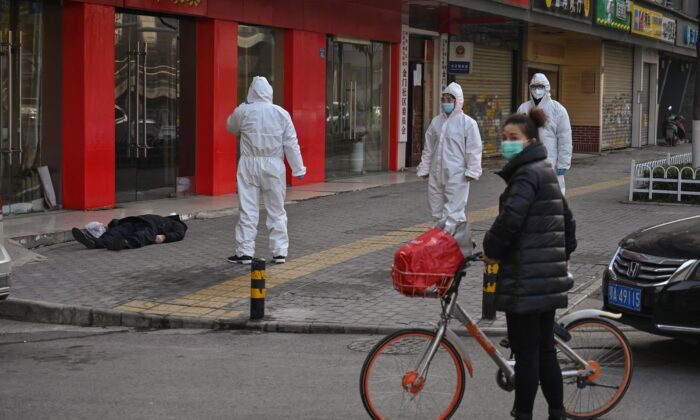 Chinese officials in protective suits checking on an elderly man wearing a facemask who collapsed and died on a street near a hospital in Wuhan, China, on Jan. 30, 2020. AFP journalists saw the body not long before an emergency vehicle arrived carrying police and medical staff in full-body protective suits. (HECTOR RETAMAL/AFP via Getty Images)
US News

Sen. Cotton Urges All Americans in China to ‘Get out Now’ Amid Virus Outbreak

Sen. Tom Cotton (R-Ark.) called on all Americans in China to flee the country after a mysterious virus continues to spread across the country, triggering lockdowns and quarantines in hard-hit areas.

“MESSAGE TO ALL AMERICANS IN CHINA: Get out—now. Contact our embassy or consulates if you need help,” Cotton wrote on Twitter on Thursday.

His statement comes as the U.S. State Department confirmed that another chartered flight back to the United States would be commissioned to evacuate American citizens living around Wuhan. The World Health Organization on Thursday, meanwhile, declared the virus outbreak a global health emergency.

Later, Cotton said that all commercial flights between the United States and China should be “shut down” as “a defensive measure.”

The outbreak of the new mysterious virus has hammered central Hubei and its biggest city, Wuhan. Chinese officials have imposed quarantines, lockdowns, and transportation bans affecting tens of millions of people across the province, while authorities have reported more cases in other Chinese provinces.

But the Republican senator said he believes the Chinese regime is misreporting the coronavirus numbers.

China claimed—for almost two months—that coronavirus had originated in a Wuhan seafood market. That is not the case. @TheLancet published a study demonstrating that of the original 40 cases, 14 of them had no contact with the seafood market, including Patient Zero. pic.twitter.com/PdgqgHjkGy

“Good morning. There was a 28% increase in coronavirus cases overnight in China. Make no mistake, though: these aren’t ‘new’ cases. Just what China is willing to admit. It’s much worse,” he wrote Thursday.

What’s more, he said that the regime should face consequences as the virus spreads across the globe.

He said on Jan. 22: “For weeks, China did not come clean about the coronavirus that they first said was only being passed from animals to humans in a seafood market in Wuhan in China. But now we know … that it is increasingly being passed from person to person. We had our first confirmed U.S. case happen just in the last couple of days, and it is spreading around the globe,” according to the Washington Examiner.

There have been six U.S. cases of the virus, including two in Illinois, two in California, one in Arizona, and one in Washington state. The Centers for Disease Control and Prevention confirmed Thursday that the first case of person-to-person transmission was reported in Illinois after a woman returned from Wuhan with the virus and spread it to her spouse.

“China is not acting right now like a government that has control of this outbreak,” Cotton told Fox News. “As you mentioned, Hong Kong has slashed travel from the mainland. China currently has more than 50 million of its own people in quarantine. That is more than the population of our West Coast [states] combined. And China has canceled school indefinitely.”