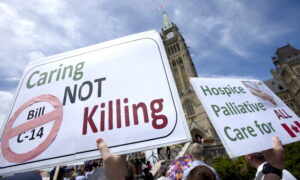 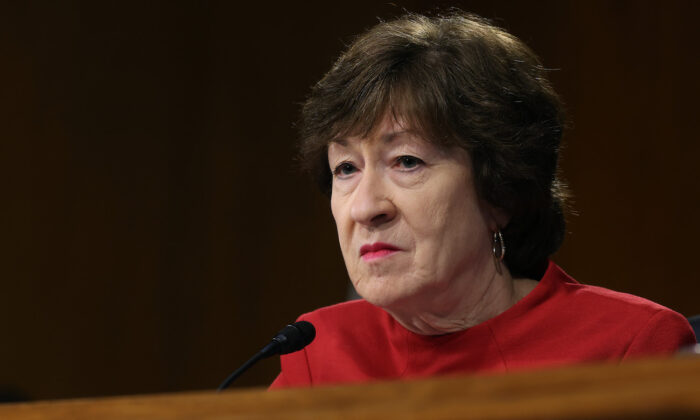 Sen. Susan Collins (R-Maine) on Sunday expressed optimism that Senate Democrats and Republicans could reach agreement on establishing a Jan. 6 commission so long as the House-passed bill undergoes several changes.

Collins told ABC’s “This Week” that she “strongly” backs the establishment of an independent commission to probe the events around the Jan. 6 Capitol breach, but her support is conditional on bipartisan staffing and a report issued no later than by the end of this year.

The House approved a bill last week that would establish the Jan. 6 commission, which would be modeled on the commission that probed the 9/11 terror attacks. The investigative body would feature 10 members—five appointed by Republicans and five by Democrats—but Collins also wants commission staff to be appointed in a bipartisan fashion.

“I think that both sides should either jointly appoint the staff or there should be equal numbers of staff appointed by the chairman and the vice chairman,” Collins said.

The aim of the commission would be to investigate factors that contributed to the Capitol breach, including how technology, including “online platforms, financing, and malign foreign influence operations and campaigns may have factored into the motivation, organization, and execution” of the incident.

Most Republicans in the lower chamber voted against the bill, though 35 crossed the aisle. The measure now faces an uncertain fate in the evenly divided Senate, with Democrats needing at least 10 Republican votes to overcome the filibuster.

Collins said another condition of her support for the bill in the Senate is that the commission’s work wrap up by the end of the year, possibly signaling Republican concern that if the probe extends into 2022, Democrats could use it to inflict political damage ahead of next year’s mid-terms.

“The second issue is, I see no reason why the report cannot be completed by the end of this year. The commissioners have to be appointed within 10 days. There’s plenty of time to complete the work,” she said.

“I’m optimistic that we can get past these issues,” she added.

Her remarks come ahead of a scheduled Senate vote on the bill this week, with Republican leadership signaling its opposition.

Senate Minority Leader Mitch McConnell (R-Ky.) said ahead of the House vote that, “after careful consideration, I’ve made the decision to oppose the House Democrats’ slanted and unbalanced proposal for another commission to study the events of Jan. 6.”

Former President Donald Trump has also spoken out against the commission, saying in a statement that Republicans in both congressional chambers “should not approve the Democrat trap of the January 6 Commission,” calling the initiative from Democrats “just more partisan unfairness.”

House Minority Leader Kevin McCarthy (R-Calif.) and Minority Whip Steve Scalise (R-La.)—the two top House Republicans—voted against the bill. McCarthy, who was the first to formally announce his opposition to the legislation, said that its scope is too narrow and should include other political violence such as the numerous riots by leftist groups in multiple cities last year.

Rep. Adam Schiff (D-Calif.) told CNN on Thursday that if Republicans in the Senate vote against the Jan. 6 commission bill, Democrats “are going to insist on getting answers one way or the other.”