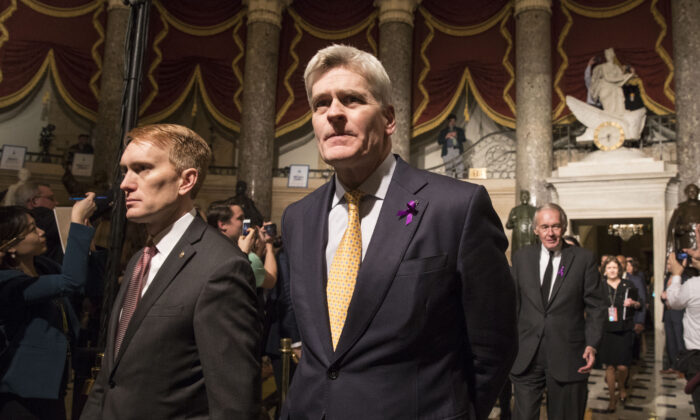 Sen. Bill Cassidy (R-La.), center, walks in the Statuary Hall of the Capitol building on the way to attending the State of the Union in Washington on Jan. 30, 2018. (Samira Bouaou/The Epoch Times)
Impeachment Trial

Another Republican senator, the 16th so far, has announced a willingness to vote to convict former President Donald Trump in the upcoming impeachment trial, depending on what’s presented to the Senate.

Sen. Bill Cassidy (R-La.) told reporters in a conference call on Tuesday that he sees it as his “constitutional responsibility” to act as a juror in the trial, adding he would not “prejudge” the evidence.

“I’ll listen to the evidence and seek out as much as possible what the truth is and that will determine how I vote,” Cassidy said, The Advocate reported.

Cassidy had previously expressed opposition to holding a trial, telling the Wall Street Journal that a trial would be “very disruptive” and “put everything else on the back burner.”

Cassidy had been listed in an Epoch Times article from Monday as one of 29 senators who oppose the trial. That number is now at 28. The number of Republican senators who have expressed openness to convicting Trump or who haven’t ruled it out is up to 16.

According to an Epoch Times tally, 40 Democrats have said they’ll vote to convict Trump or indicated they will do so. Eight have said they’ll listen to the evidence during the trial first. Two, Sens. Raphael Warnock (D-Ga.) and Kyrsten Sinema (D-Ariz.) haven’t stated their positions. Their offices didn’t respond to requests for comment.

Even if all 50 Democrats vote to convict Trump, they’ll need to convince 17 Republicans to join them. A conviction requires a supermajority vote.

Trump was impeached for alleged incitement of insurrection on Jan. 13. His term ended a week later.

The trial is slated to start the week of Feb. 8. Senate President Pro Tempore Patrick Leahy (D-Vt.) is planning to preside over the trial because Supreme Court Chief Justice John Roberts apparently does not wish to fill that position.