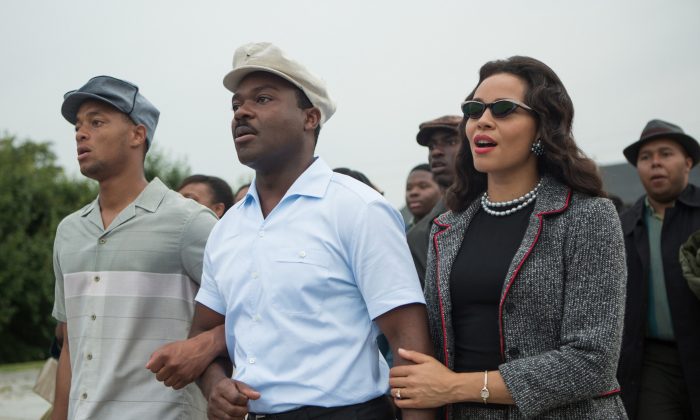 The depiction of former president Lyndon B. Johnson clashing with Martin Luther King Jr. over civil rights in the new movie Selma has sparked a backlash.

Historians are saying that Johnson did not fight with King over the protests in Selma.

“Everybody has to take license in movies like this, and it can be hard for nit-pickers like me to suspend nit-picking,” Diane McWhorter, author of Carry Me Home: Birmingham, Alabama: The Climactic Battle of the Civil Rights Revolution, told the New York Times.

“But with the portrayal of L.B.J., I kept thinking, ‘Not only is this not true, it’s the opposite of the truth.'”

Selma, from director Ava DuVernay, has earned praise for its depiction of the 1965 voting rights marches led by King, but the controversy is casting a shadow over the film.

Joseph Califano, a former aide to Johnson, wrote in a Washington Post article that DuVernay got the plot point wrong, including the allegation that Johnson had the FBI investigate King.

“Selma was LBJ’s idea,” Califano wrote. “He considered the Voting Rights Act his greatest legislative achievement, he viewed King as an essential partner in getting it enacted — and he didn’t use the FBI to disparage him.”

Califano said that Johnson urged King to seek out “the worst condition that you run into” in the South. The resulting graphic images would result in a change, he said.

Julian Bond, a civil rights leader who worked with King, praised the film but also said the portrayal of some aspects of the events were wrong, including Johnson supposedly being an obstacle for King.

“He did support King’s fight for voting rights. He probably is the best civil rights president America has ever had. The best. Absolute best,” Bond told CBS. “I think the movie people wanted Dr. King to have an antagonist. Why not have it be LBJ?”

DuVernay took to Twitter to hit back at the criticism. “Notion that Selma was LBJ’s idea is jaw dropping and offensive to SNCC, SCLC and black citizens who made it so,” she said.

“Bottom line is folks should interrogate history. Don’t take my word for it or LBJ rep’s word for it. Let it come alive for yourself,” she added.

Gary May, a professor at the University of Delaware, said the tension isn’t surprising.

“Here you have the first film about King, and some people are coming in and saying, ‘The story is really about the white people,'” he said. “In historical truth, the story was really about everybody.”

At the same time, May, who went to an advance screening in November, said there “is a problem with the tone” in the scenes that include Johnson.