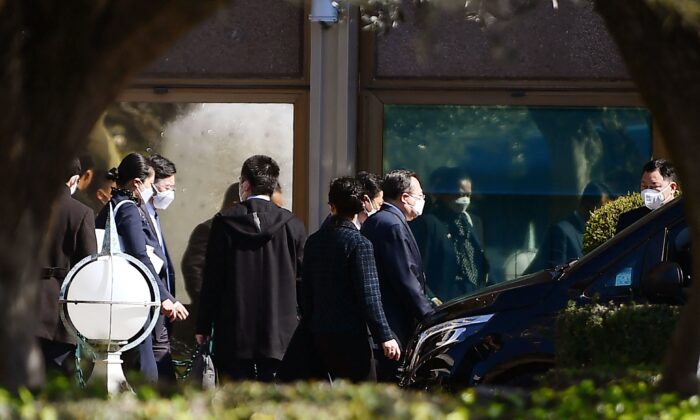 The Chinese regime claims it supports peace talks between Russia and Ukraine. However, it repeats Moscow’s words, criticizes the United States without verifying the facts, and hasn’t prompted Russia to stop the war.

By press time, the Chinese regime still hadn’t announced or made a statement that it recognized Russia’s invasion of Ukraine. The regime even refused to admit there’s a war between Russia and Ukraine, and insisted on calling it a crisis.

“The Chinese Communist Party regime is enjoying the current chaos. It’s happy to see that the United States and Europe are busy protecting the Ukrainian people and trying to cease the fighting between Russia and Ukraine. Then, the CCP can have more strategic space,” U.S.-based China affairs commentator Wang He told The Epoch Times on March 16.

“Russia’s invasion is in Beijing’s interest,” Wang said. He says that Beijing tried to team up with European countries when it faced conflicts with the United States. Now, almost all European countries are working with the United States to oppose Russia. China wants to use this chance to tighten its relationship with Russia and force the Kremlin to fully support it in global affairs, he said.

“China is committed to facilitating dialogue for peace, and believes that the international community should jointly support the peace talks between Russia and Ukraine for early substantive outcomes, so as to de-escalate the situation as soon as possible,” Chinese Foreign Affairs Ministry quoted Yang’s words in the meeting’s summary.

Before the Yang-Sullivan meeting in Rome, several media outlets quoted U.S. officials and reported that Russia asked Beijing for military equipment to support its invasion of Ukraine.

The Chinese regime denied the allegation, and started a new wave of attacking the United States on its internet.

On March 16, the MFA spokesperson said that the United States operates dozens of military biological laboratories in Ukraine. This allegation was first spread by Russian officials on March 10 and was quickly clarified as a rumor by the U.S. government.

The question was raised by a reporter of the regime’s mouthpiece CCTV. Beijing is well-known for arranging for state-run media reporters to ask the questions that they want asked at press conferences, and for the officials to reply with their prepared answers.

Since March 10, the Chinese regime has promoted the fabrication that the “U.S. has military biological laboratories in Ukraine” by using its propaganda system.

China’s state-run media outlets, including CCP mouthpiece People’s Daily and CCTV, are reporting that the United States is developing biological weapons in Ukraine, and these laboratories have transferred over 140 containers of bat ectoparasites and human serum samples to other countries.

Those media outlets haven’t done any fact checking or mentioned the U.S. clarification statement. They simply translate the Russian reports into Chinese and broadcast them to Chinese people via television, newspapers, radio, and internet.

At the same time, the regime’s 50-cent trolls started posting on China’s social media platforms that the U.S. military labs in Ukraine were real, they were developing bio-weapons, and that they had leaked the CCP virus to the world.

These topics were listed among the most popular ones in China for a while, and topped the list again on March 15.

Liu Lipeng, who worked as an online censor in China for a decade, posted on Twitter on March 10: “The three major central regime-run media co-led the propaganda, and caused the story [of U.S. military labs in Ukraine] to be read 270 million times in one day (Mar. 10) [in China] …. Almost all popular ‘patriots’ are involved in the hot discussions on social media.”

On March 16, Liu told Voice of America that the most popular topics on China’s social media platforms aren’t counted based on the real number of views or comments, but are assigned and published according to the regime’s requests. “It needs an order from the central government to make this happen,” Liu said.

On the same Chinese social media platforms, the U.S. Embassy in China’s posts negating the rumor were censored. The embassy posted screenshots of its posts being banned on Twitter on March 11, to express its anger.

Not only the U.S. Embassy but also Chinese organizations and individuals are subjected to censorship.

Currently, nobody in China can successfully post content, photos, or videos showing Russia’s invasion or Russian troops killing civilians. The regime even organized the 50-cent trolls to bully the Chinese nationals in Ukraine who post information and images about the real situation on uncensored social media platforms.

“If you guys are really capable, you should come here to kill me rather than threaten me [on social media platform],” a Chinese citizen in Odesa, Ukraine replied to the 50-cent trolls on YouTube on March 1.

Five renowned historians from five top Chinese universities haven’t published anything after they publicly called for Russia’s invasion to stop on Feb. 26 and were censored by the regime.