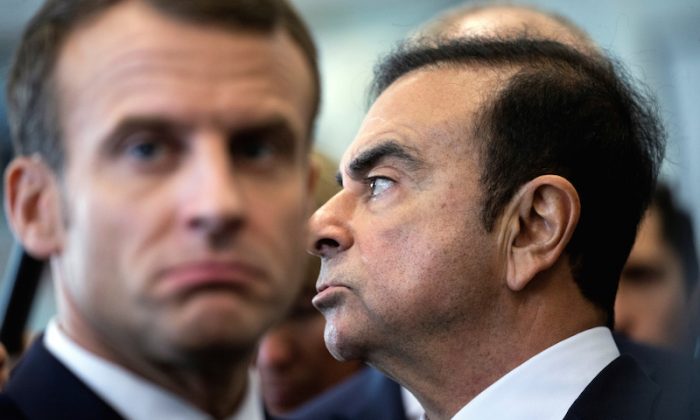 PARIS—The arrest of Renault-Nissan boss Carlos Ghosn has triggered new attempts by the Japanese carmaker to shake off the control of its French parent—adding to the problems piling up on President Emmanuel Macron’s desk in the Elysee Palace.

But this one, more than most, may be of Macron’s own making.

In April 2015, as a 37-year-old economy minister with then-unknown presidential ambitions, Macron ordered a surprise government stake increase in Renault, designed to secure double voting rights for the state. The overnight move profoundly rattled the Japanese end of the Renault-Nissan alliance.

In the ensuing eight-month boardroom fight between Macron’s ministry and Hiroto Saikawa—Nissan’s second-in-command at the time—many now see the seeds of today’s crisis.

When Ghosn’s Gulfstream touched down in Tokyo on Nov. 19, prosecutors were waiting. Nissan, the company he rescued from bankruptcy and had overseen for almost two decades, outlined allegations of financial misconduct against its chairman and said governance had been eroded by Renault’s control.

Saikawa has since contested Renault’s right to appoint executives and directors under the alliance master agreement, in correspondence seen by Reuters. Such fundamental differences now threaten the future of the partnership, which rivals Volkswagen and Toyota on the global auto industry stage.

“President Macron himself has skin in the game,” Max Warburton, an analyst with New York-based asset manager AllianceBernstein, said this week.

“He must recognize that his decision in 2015 to increase the French state’s holding in Renault … likely impacted Japanese perceptions of the alliance and heightened concerns that Nissan was ultimately within the control of the French government.”

The Elysee declined to comment, but an adviser said the president had “no regrets” about the events of 2015.

Macron, who surged to victory in elections last year to became France’s youngest president, now finds himself battling street protests and record low approval ratings. The Renault-Nissan crisis may draw more attention to the risks of his bold interventionism, once seen as refreshing.

The year before his move on Renault, the government under Socialist President Francois Hollande had passed the Florange law. Named after a steel furnace whose closure became a symbol of decline, it doubled voting rights for long-term investors—chief among them the French state—in any listed companies that did not opt out via a shareholder vote.

Over several months starting in late 2014, Macron, a former Rothschild dealmaker, tried in vain to dissuade Ghosn and the Renault board from proposing an opt-out at the company’s April 30 general meeting. With a 15 percent stake in the carmaker and an only slightly larger share of the vote, the government seemed likely to lose such a face-off.

Then, on the evening of April 7, Macron called Ghosn to let him know—as a courtesy—that the state had bought another 4.73 percent of Renault for 1.2 billion euros ($1.4 billion), would announce its maneuver in the morning and planned to sell back down to 15 percent only after defeating his opt-out.

“He would always go in with guns blazing,” a former minister said of Macron. “Only then would the real power dynamics of the situation register.”

With that step, seen by detractors and admirers alike as an unprecedented government “raid”, the simmering battle of egos between Ghosn the global CEO and Macron the wunderkind banker-turned-minister had burst into the open.

Brushing aside warnings, Macron pressed ahead and defeated the opt-out. The vote handed France an effective blocking minority at Renault, which in turn controlled Nissan shareholder meetings via its 43.4 percent stake in the Japanese firm.

Alarm bells rang in Tokyo as that sank in, ratcheting tensions higher over the months that followed. Nissan threatened to exit the Restated Alliance Master Agreement (RAMA)—a radical step that would have freed it to buy up shares in its smaller French parent, and end or reverse Renault’s control.

“The governance of Renault and consequently the autonomy of Renault management, which have been the basis of trust (for) the alliance, will be significantly impacted,” Saikawa wrote in a Sept. 3, 2015, note to the Renault board obtained by Reuters.

A Nissan spokesman declined to comment for this story.

Macron’s staff initially dismissed Saikawa’s demands—that Renault sell down its controlling Nissan stake, restore voting rights to Nissan’s 15 percent Renault holding and relinquish control of the allianc—seeing them as dictated by Ghosn, who at that point remained Nissan CEO.

“When Ghosn talks about what Nissan and Japan think, he’s speaking for himself,” an official at the French agency that oversees state shareholdings said at the time. “It’s all rubbish as far as I’m concerned.”

Fast-forward three years: Ghosn is gone, detained for now in a Tokyo cell to face accusations that he misappropriated Nissan assets, misrepresented company investments and—partly as a result—massively under-reported his real compensation. He denies the allegations, according to NHK television.

And yet the same Nissan demands are back on the table.

“The terminology, the phrases, and vocabulary we’re hearing today are much the same as in 2015,” said another former French government official, now an investment banker.

“We didn’t believe Ghosn when he presented the Japanese position, but in fact it was no invention.”

Macron’s pressure for a full Renault-Nissan merger also raised hackles in Japan months before the Nissan whistleblower probe that led to Ghosn’s arrest and ouster as chairman.

Having previously insisted that France would first have to sell its Renault stake, Ghosn agreed this year to explore a closer tie-up in return for the renewal of his Renault CEO contract with government backing, and he then revived deal talks.

This week, executives from Renault, Nissan and Nissan-controlled Mitsubishi are gathering for the first time since Ghosn’s arrest. The Amsterdam meetings are aimed at keeping shared plants and programs ticking over in the sudden absence of a global leader, and averting conflict.

But as the appointments dispute threatens to escalate into a new boardroom fight, Renault’s hand is critically weakened by another deal Macron struck to end the last stand-off.

At the end of 2015, as tension mounted over Nissan’s threat to sever alliance ties, France agreed to cap its Renault voting rights at 18 percent for most non-strategic decisions.

But the Macron-backed “stabilization” agreement went further, with a binding pledge by Renault never to oppose the Nissan board at a company shareholder meeting. In the now-unfolding tussle over directorships, that is a handicap.

The reversal was a staggering “failure of oversight” from a government that had intervened to protect what it saw as Renault’s interests, according to Loic Dessaint, CEO of Proxinvest, a Paris shareholder advisory firm.

“It’s nothing less than the abandonment of Renault’s rights over its main asset,” Dessaint said on Tuesday. “Renault has effectively forfeited its votes in Nissan.”

He added: “Now we’re approaching a situation where they realize too late it’s had an impact on their negotiating position. The alliance power balance is already upended.”

When approached by Reuters, former president Hollande declined to comment on his administration’s handling of the voting rights saga of three years ago.

But Macron’s cabinet colleague said he seemed distracted towards the end of the year when—as is now known—he was preparing to launch En Marche, the political party that eventually carried him to the presidency. The web address en-marche.fr was registered on Jan. 7, 2016, less than four weeks after the Renault-Nissan deal was brokered.

“It didn’t prevent him from being very engaged with his dossiers, given his intelligence and capacity for work,” the ex-minister said. “But they were no longer his main concern.”

Ghosn also bears some responsibility for escalating his 2015 battle with the economy minister, he added.

“Ghosn had the absolutely insufferable conviction that he was above dealing with ministers, so he’d only ever consider talking to a prime minister—which I doubt endeared him much to Macron, who was also rarely unaware of his own significance.”

At least part of that verdict was shared by another cabinet colleague, Christophe Sirugue, when asked about his relationship with Renault’s CEO a year after the dispute was settled.

“With Carlos Ghosn? You have got to be kidding,” said Sirugue, then industry minister for Europe’s third-ranked economy—and Renault’s biggest market. “As far as he’s concerned I don’t exist.”