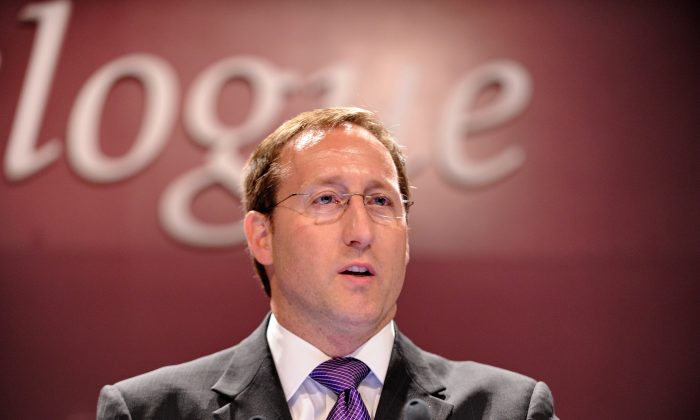 Canadian Defense Minister Peter MacKay speaks during the plenary session at the International Institute for Strategic Studies (IISS) 11th Asia Security Summit in Singapore on June 3, 2012. The IISS is being attended by defence officials from around the world. AFP PHOTO / ROSLAN RAHMAN (Photo credit should read ROSLAN RAHMAN/AFP/GettyImages)
Canada

“It’s surprising that the Chinese envoy would even suggest such a thing,” said MacKay, a former minister of justice, defence, and foreign affairs in former prime minister Stephen Harper’s government, in a phone interview.

In the negotiations, we have to be cognizant of the fact that we are a democratic country, we place a high priority on human rights, we believe firmly in the rule of law.
— Peter MacKay, former cabinet minister

According to a March 24 Globe and Mail report, Lu Shaye, the Chinese ambassador to Canada, said China will regard as trade protectionism any attempt by Canada to block Chinese firms from taking over Canadian companies. Lu added that Beijing doesn’t want human rights to be used as a “bargaining chip” in the talks.

MacKay believes it is critically important for Canada to have human rights and national security issues on the table when discussing trade deals with China.

“I think that our trade pursuit and the protection of our national interests, our security interests, are inseparable,” he said.

“And I believe as well that in the negotiations, we have to be cognizant of the fact that we are a democratic country, we place a high priority on human rights, we believe firmly in the rule of law. … These are notable differences between Canada and China.”

MacKay noted that there is ample evidence of Chinese cyber attacks and intrusions against Canada, indicating that protection of our national interests needs to be foremost in the minds of anyone embarking on trade discussions with China.

In one well-publicized case in 2014, a Chinese state-sponsored cyberattack hacked into the computer systems of Canada’s National Research Council. According to a March 30 Globe report, federal documents show that the cyberattack cost Canada hundreds of millions of dollars.

The Liberal government sparked renewed concern last month when it approved a Chinese company’s takeover of Montreal high-tech firm ITF Technologies, a deal previously blocked by the Conservative government under Harper. The applications of the Canadian company’s laser technology products include making weapons.

“Without national security clearance, it opens up Canada and all of our interests—critical infrastructure, our national security, our banks, our institutions—it opens them up for certain risks, and it will also by the way cause serious concerns amongst our allies, the United States, Great Britain, Australia, and New Zealand,” MacKay said.

Western intelligence agencies have often warned that China’s state-owned and private enterprises act in the interest of the Chinese Communist Party to the detriment of the West. Canada decided to block Chinese telecom giant Huawei from a government communications network project in 2012 due to security risks.

In another case publicized in 2011, as previously reported by Epoch Times, Chinese hackers penetrated the computers of the finance, defence, and treasury departments in Canada.

A 2013 documentary film produced by two senior generals in the Chinese military labels the United States as China’s enemy.

Although an interview with a Global Affairs Canada spokesperson wasn’t possible, department spokesperson Natasha Nystrom said in an emailed statement that Canada is in the early stages of exploratory trade talks with China.

“We are also seeking Canadians’ views on whether and how to pursue a Canada-China FTA [free trade agreement]. The government’s approach is one that puts the interests of Canadians, including the opportunities that exist for the middle class and crucially, our values, front and centre,” Nystrom wrote.

John McCallum, Prime Minister Justin Trudeau’s former immigration minister and now Canada’s ambassador to China, said in an interview with the Toronto Star that he is eager to do “even more” than already suggested by Trudeau to improve relations with China. He insisted the Trudeau government will ensure that promoting and protecting human rights remains a priority, and any agreements with China will take these concerns into account.

Randy Hoback, a Conservative MP and vice-chair of the parliamentary committee on international trade, says Canadian administrators shouldn’t be naive when dealing with China.

“They were going to allow the approval of the telecom company out of Montreal, where our security people are saying ‘no way, you cannot let this happen.’ This should be a very dangerous precedent,” says Hoback.

“You have to go into this type of situation with your eyes wide open, and I think they’re being really naive and really don’t necessarily understand who they’re dealing with.”

With reporting by Matthew Little