Installation to be completed by end of 2014 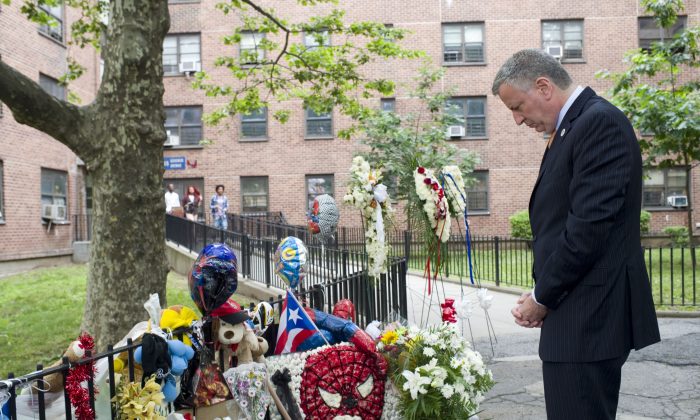 Mayor Bill de Blasio pauses by the vigil of Prince Joshua "PJ" Avitto at the Boulevard Houses in East New York, Brooklyn, on June 11. De Blasio later announced that security cameras would be installed in 49 public housing projects by the end of the year. (Rob Bennett/Mayor's Office)
By Ivan Pentchoukov

NEW YORK—The city has approved contracts worth $25 million to install security cameras in 49 public housing projects. Mayor Bill de Blasio made the announcement Wednesday, days after a stabbing attack in East New York that killed one child and injured another.

It took the city just one week to approve contracts that sometimes stall for years. Technicians began installing equipment at the Boulevard Houses in East New York, Brooklyn, as the mayor visited the neighborhood to see the work first hand. The city expects to finish installing cameras in all 49 projects by the end of the year.

“For many of us as parents this is an incredibly painful tragedy.” de Blasio said. “We all have an obligation to do everything we can to protect our children.”

The first 17 cameras will be installed in the Boulevard Houses in, at most, four months, according to the New York City Housing Authority. Installing the cameras would require setting up a central unit, or the “brains” of the system, which is then wired to the nine buildings at Boulevard Houses.

“It’s sad that it had to come to this. It is sad that we had to lose a little angel,” said Inez Rodriguez, the president of the tenant association at the Boulevard Houses.

Prince Joshua “PJ” Avitto, 6, and Mikayla Capers, 7, were attacked with a knife in an elevator on June 1. PJ died from the injuries. Mikayla was released from the hospital on Wednesday. A man suspected of attacking them is in custody.

De Blasio blamed the previous administration for the delay, but added that he did not move fast enough himself upon taking office.

“The previous administration dropped the ball in a big way,” de Blasio said.

Changes Ahead
Security cameras are only the first step towards making the neighborhood safer, de Blasio said. The mayor detailed other efforts, including cooperation between the police and the community, repairing front doors, adding after-school and recreation programs, and neighborhood patrols, among other efforts.

Council member Inez Barron said that she would introduce a bill to rename the corner of Schenck and Stanley avenues after Prince Joshua. Barron also called on de Blasio to demand additional funding from the state, similar to the $1 million the state allocated to Boro Park in Brooklyn after a Hasidic boy, Leiby Kletzky, was murdered there.