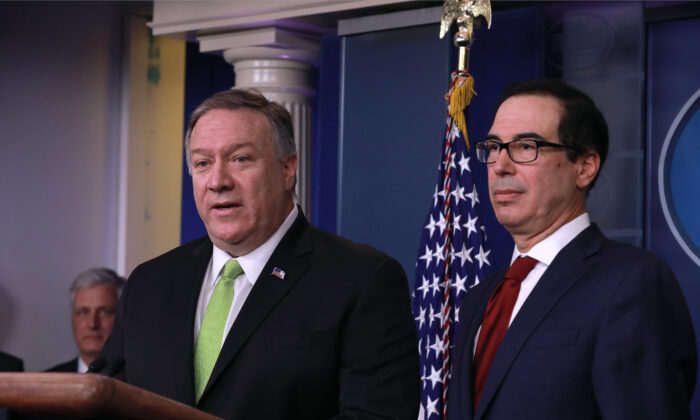 Secretary of State Mike Pompeo (L) and Secretary of the Treasury Steve Mnuchin at a media conference in the White House briefing room in Washington on Jan. 10, 2020. (Charlotte Cuthbertson/The Epoch Times)
Middle East

Pompeo: US Believes Ukrainian Plane Was ‘Shot Down by Iranian Missiles’

Secretary of State Mike Pompeo told reporters Friday that the United States believes a Ukrainian jetliner was “likely … shot down by Iranian missiles” before it crashed in Iran earlier this week, killing everyone on board.

“When we get the results of that investigation I am confident we and the world will take an appropriate response,” he remarked. Iran, via state-run media outlets, has denied claims that it was responsible for downing the plane, which had 176 people on board and went down shortly after taking off from the Tehran airport.

It came a day after he gave an interview where he didn’t rule out the possibility that the Ukraine International Airlines plane that went down over Iran was caused by a mechanical failure after Canadian Prime Minister Justin Trudeau and UK Prime Minister Boris Johnson suggested Iran shot the plane down.

“It’s possible it’s mechanical failure, but we’ll have to see if, in fact, it’s the case that there was something more insidious than this,” Pompeo told Fox News, according to a State Department transcript.

If the plane was shot down by Tehran, Pompeo said that “the American people should know that this would have been Iranian malfeasance that caused it.”

“And importantly, you identified the Canadians that passed; my condolences to everyone who was on that flight, including the Iranian citizens who were traveling on that plane as well,” he said. Of the 176 people who died on the plane, more than 60 of them were Canadian nationals.

His comments came after Trudeau, Johnson, and a number of unnamed U.S. officials said Iran likely shot down the plane on accident after it had launched more than a dozen missiles at U.S. forces in Iraq on Tuesday night.

The head of Iran’s civil aviation authority, via state-run media, said no missile hit the plane. According to IRNA, Ali Abedzadeh “underlined that he is confident that the aircraft was not hit by a missile, the aircraft was flying for more than 1.5 minutes caught fire and the crash site indicates that the pilot had decided to return.”

But to add to the claims the plane was shot down, a video posted by the New York Times and other news outlets appeared to show a missile striking a plane over Tehran.

Pompeo, in the interview, called on Tehran to cooperate with international investigations into the matter.