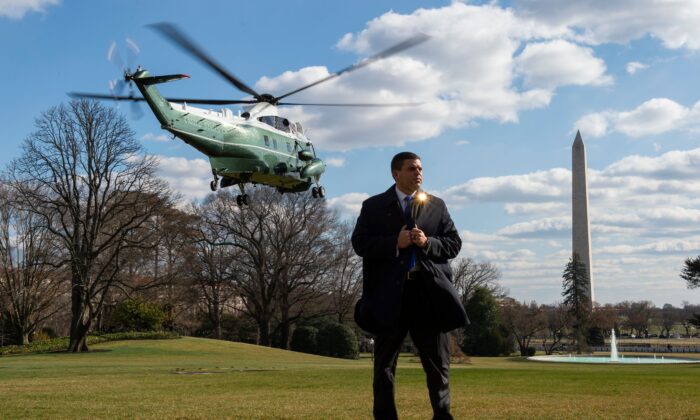 File photo showing a Secret Service agent standing on the South Lawn of the White house as Marine One helicopter lifts off in Washington, on Feb. 29, 2020. (Roberto Schmidt/AFP via Getty Images)
Crime and Incidents

The U.S. Secret Service said on Aug. 26 that it has seized $286 million in fraudulently obtained pandemic loans, bringing the total amount of stolen funds recovered by the agency to $1.4 billion since the relief program was rolled out in 2020.

The Secret Service said in a statement that it had returned the $286 million to the Small Business Administration (SBA), the federal agency responsible for distributing relief funds under various programs enacted at the height of the pandemic.

All the funds in question were stolen by criminals who fraudulently submitted applications under the Economic Injury Disaster Loan (EIDL) scheme. The program, which ended several months ago, was meant to help small businesses recover from the economic impact of the COVID-19 outbreak.

The SBA’s Office of the Inspector General has estimated that at least $80 billion distributed from the $400 billion EIDL program may have been fraudulent, much of it by way of stolen identity scams.

The investigation that netted the $286 million in stolen funds was initiated by a Secret Service field office in Orlando, Florida. In the course of the probe, agents from the Orlando office found that fraudsters had used a third-party payment system called Green Dot Bank (GDB) in an attempt to hide their criminal activity.

“Working with GDB, the Secret Service was able to identify over 15,000 accounts used in the conspiracy and seize the $286 million contained in these fraudulent accounts,” the agency said in the statement.

“This is an important step in returning stolen funds to the American people,” Kevin Chambers, the Department of Justice’s director for COVID-19 fraud enforcement, said in a statement.

“This forfeiture effort and those to come are a direct and necessary response to the unprecedented size and scope of pandemic relief fraud,” he added.

The Secret Service said it had initiated over 3,850 pandemic-related fraud investigations and inquiries.

The EIDL program was initiated under the Coronavirus Aid, Relief, and Economic Security (CARES) Act, which was signed into law on March 27, 2020.

In total, all the stimulus bills approved by Congress in the wake of the pandemic amounted to roughly $5 trillion.

The government’s pandemic relief efforts have been marred by all manner of complications, with billions fraudulently claimed across the various programs.

Justice Department Inspector General Michael Horowitz, who oversees COVID-19 relief spending, told CNBC in March that the way the programs were structured made them prone to fraud and abuse.

“The Small Business Administration, in sending that money out, basically said to people, ‘Apply and sign and tell us that you’re really entitled to the money,’” he told the outlet at the time.

“And, of course, for fraudsters, that’s an invitation. … What didn’t happen was even minimal checks to make sure that the money was getting to the right people at the right time.”

The Government Accountability Office reported in March that agencies were able to distribute COVID-19 relief funds swiftly at a time that was rife with uncertainty but “the tradeoff was that they did not have systems in place to prevent and identify payment errors and fraud,” due in part to “financial management weaknesses.”