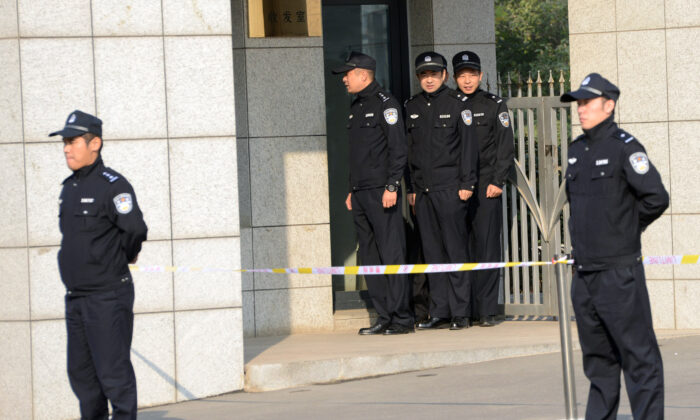 Not daring to show defendants, their relatives, or the lawyers this unpublished document, a Chinese judge Wang Rongfu yelled at a Falun Gong practitioner’s family member in April: “Don’t argue with me whether my order is against the law. The higher court told us that Falun Gong related cases are special, and the practitioners don’t have the right to be defended … A murderer can hire a lawyer. Falun Gong practitioners can’t.”

The family member read the secret document—No. 226 Document in 2020, Jilin Provincial High Court—by chance on April 21, and recorded part of it. “In principle, no lawyer is allowed to represent cases that are related to a cult,” read the document.

Falun Gong is a spiritual discipline with five exercises and moral teachings based on the principles of truthfulness, compassion, and tolerance. In July 1999, the Chinese Communist Party (CCP) started a brutal persecution of practitioners that continues to this day.

The No. 226 document goes against a series of Chinese laws, including the Constitution, the Criminal Procedure Code, the Lawyers Act, the Judge Act, the Laws Interpretations by High Court, and the Rules of High Procuratorate, which grant all defendants the right to hire a lawyer to represent them.

However, the secret document revealed the real reason behind the behavior of the judges in northeastern China’s Jilin Province in the past year: lawyers can’t represent Falun Gong practitioners.

A recent case in Nong’an county in Jilin is one example that involves more than 20 Falun Gong practitioners. One male was tortured to death in prison on Aug. 26, 2020; eight were sentenced to two to ten years in prison on July 26 without a lawyer representing them. Due to the Chinese regime’s strict control, it’s hard to know the status of the others who were arrested.

On July 15, 2020, more than 24 Falun Gong practitioners in Nong’an were detained because they refused to denounce their beliefs. On that day, the Chinese police broke in and raided the practitioners’ homes, and took away valuables like cash, computers, printers, and books, according to Minghui.org, a U.S.-based website dedicated to recording the persecution of Falun Gong in China.

Jiang Quande, a then 66-year-old male practitioner, was in custody with his then 67-year-old practitioner wife Sun Xiuying. Jiang’s health worsened quickly at the Nong’an detention center. Two weeks later, Jiang was released when he was at the edge of death. He died at home on Aug. 26, 2020. The Chinese regime didn’t release Sun; instead, they sentenced her to four years in prison on July 26, 2021.

After these practitioners were detained, their family members hired lawyers and tried to visit the jailed followers, which wasn’t easy because of the regime’s constant intervention.

In early 2021, judges at Dehui Court in Changchun city, which handled the cases, asked some of the practitioners’ family members to sign a declaration that they didn’t practice Falun Gong. However, the court didn’t tell the families about the hearing arrangements, the progress of the cases, or the sentences after the declarations were signed.

In China, lawyers need to submit an application to the court before they can represent a defendant. In the practitioners’ cases, lawyers couldn’t submit their applications because the court stalled them with a different excuse each time, such as asking for different types of certifications that weren’t usually required.

One lawyer tried over 10 times to submit the application but wasn’t successful. Without the court’s approval, the lawyers can’t review the indictments and other related legal documents, nor enter the court.

On July 26, the court handed down sentences without notifying the practitioners, their relatives, or their lawyers. The practitioners finally knew the sentences when they were transferred from the detention center to different prisons.

The judges at Dehui Court mentioned the secret document several times when they talked to practitioners’ relatives, and one relative was able to read it.

After learning about this secret document, lawyers and practitioners’ relatives asked the Jilin Provincial High Court for a copy. The court has refused to answer them.

When The Epoch Times called the Jilin Provincial High Court hotline about the document, the operator said that he hadn’t heard of it and refused to talk more.