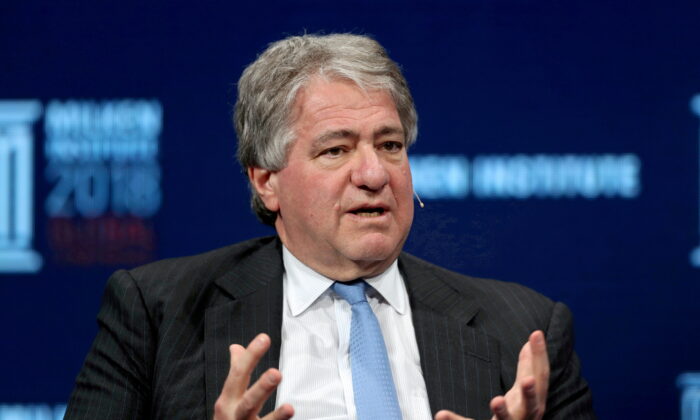 The claim, by a woman identified as “Jane Doe,” was included in a proposed amended civil lawsuit filed on Monday night by Guzel Ganieva, who has accused the 70-year-old Black of rape and other sexual abuse and is seeking unspecified damages.

“This claim is complete fiction and has no basis in fact or law,” a representative for Black said on Tuesday. “It is telling that it is asserted anonymously and concerns events that allegedly occurred some 20 years ago.

“It is abundantly clear that the only goal here is to publicly destroy Mr. Black’s personal and professional reputation and to defame him by perpetrating a baseless smear campaign,” the representative added.

In earlier court filings, Black had forcefully denied Ganieva’s claims, including that he tried to arrange for her to have sex with Epstein in 2008.

According to Monday’s filing with a New York state court in Manhattan, Doe was a struggling single mother and former model from New Jersey who had already given Epstein massages when he arranged for her to massage Black.

The filing said that after giving Doe $300, Black violently assaulted her and caused her “tearing pain” in the massage room in Epstein’s mansion.

Black paid Doe $5,000 when they later met in Manhattan’s St. Regis Hotel, after she “allowed herself to be convinced to see him,” the filing said.

She did not report the alleged rape at the time because a friend told her no one would believe her, the filing added.

Jeanne Christensen, a lawyer for Ganieva, said in an email that Doe cannot sue Black because the statute of limitations had run out.

“As to her identity, it is hard enough for women to come forward when they have civil claims—when they are in real fear of the person that already physically violated them,” she added.

It is unclear whether a judge will let Ganieva formally file the amended lawsuit.

Black, who is married, has said he paid Ganieva $100,000 a month for several years not to discuss their consensual 6-1/2-year relationship after she tried to extort him of $100 million.

Those payments stopped after Ganieva, a former model, tweeted about Black in March.

Black stepped down from Apollo this year after an outside independent review found he had paid Epstein $158 million for tax and estate planning. The review also said Black was not involved in Epstein’s criminal activities.

Epstein killed himself in a Manhattan jail in August 2019 while awaiting trial on sex trafficking charges. Black has publicly regretted his involvement with Epstein.