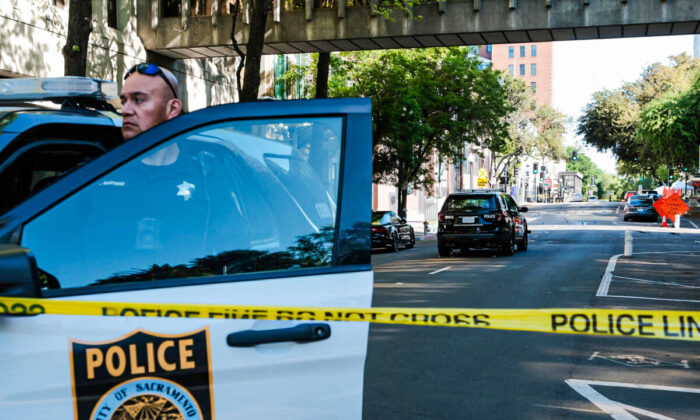 Police officers work the scene on the corner of 10th and L street of a shooting that occurred in Sacramento, Calif., in the early morning hours on April 3, 2022. (David Odisho/Getty Images)
Crime and Incidents

A second suspect was arrested in connection to the Sacramento shooting that left six dead and more injured over the past weekend, officials announced Tuesday.

Smiley Martin, 27, the brother of Dandrae Martin, 26, was arrested by police, according to the Sacramento Police Department in a Tuesday update. Smiley faces possession of a firearm by a prohibited person and possession of a machine gun, while Dandrae, who was arrested Monday, faces charges of assault with a deadly weapon and being a convict carrying a loaded gun.

Neither brother was charged with homicide in connection to the shooting incident, which reportedly occurred during a fight in downtown Sacramento early on Sunday morning.

Police said that Smiley Martin “was located at the scene with serious injuries from gunfire and was transported to an area hospital for treatment” and is currently “under the supervision of an officer at the hospital while his treatment continues.” He was taken into custody by detectives on Tuesday, said officials.

“Once Smiley Martin’s medical care has been completed and he is determined to be fit for incarceration,” police said in a news release, “he will be booked at the Sacramento County Main Jail for possession of a firearm by a prohibited person and possession of a machine gun.

Dandrae Martin, meanwhile, has had previous run-ins with the law, according to local media, citing court records. He has been wanted in Riverside County, California, since 2015, while jail records revealed that he has an outstanding warrant for a domestic violence charge. He was freed from an Arizona prison in 2020 after he served about 18 months for violating probation, according to court records.

Smiley Martin posted a 15-minute Facebook Live video late on Saturday night, showing that he appeared to be holding a handgun, reported the Sacramento Bee.

Sacramento Mayor Darrell Steinberg read their names during a vigil on Monday night that was attended by grieving family members.

“So we gather here to remember the victims and to commit ourselves to doing all we can to ending the stain of violence, not only in our community but throughout the state, throughout the country, and throughout the world,” Steinberg said.

“Investigators continue to examine evidence, contact witnesses, and interview involved parties to gain a complete understanding of the incident,” police said. “As these processes occur, different and/or additional charges may apply. The Sacramento County District Attorney’s Office will be reviewing all evidence to determine appropriate charges.”