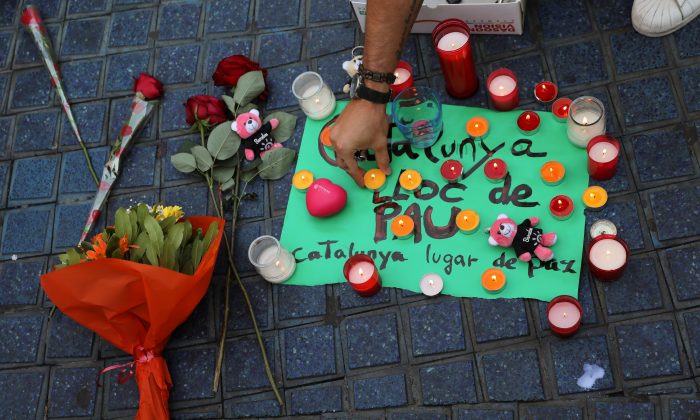 A person places a candle on a placard, reading in Spanish and Catalan "Catalonia, place of peace", in the area where a van crashed into pedestrians at Las Ramblas street in Barcelona, Spain on August 18, 2017. (REUTERS/Sergio Perez)
Europe

A Spanish High Court judge on Thursday ordered another one of the four suspects arrested over twin attacks in Catalonia last week, Salh El Karib, to be freed on certain conditions, according to a court source.

El Karib ran an internet cafe in the northeastern Spanish town of Ripoll where most of the alleged members of the 12-strong cell lived.

Investigating judge Fernando Andreu had originally asked for him to remain in police custody pending further investigation of his possible role in the attacks, which killed 15 people in Barcelona and the coastal resort of Cambrils.

El Karib will have to hand over his passport and check into court every week. The judge decided that there was not enough evidence to keep El Karib in custody, the court source said.

Another man arrested over the attacks, Mohamed Aalla, was also released on certain conditions earlier this week while two others were remanded on charges of membership of a terrorist group and murder.