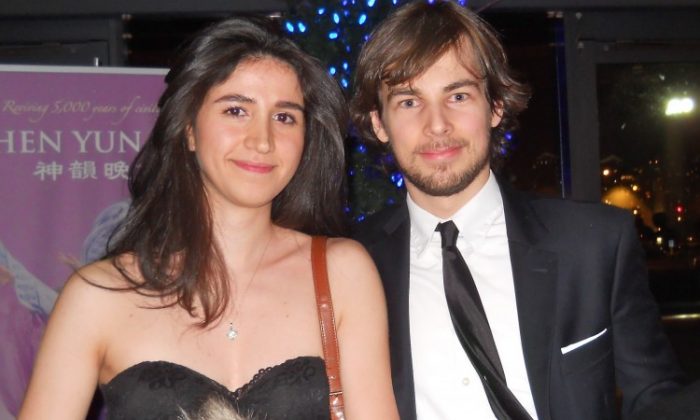 Aerospace manager Don Sharkey, who works with satellites and robotics like the Canadarm, said it was his family’s first time to see the Shen Yun performance and they were “very, very impressed.”

“We’re enjoying it very much,” he said during intermission.

“The dancers are magnificent. The music is magnificent, and the matching with the videos and the projections—it’s all really great.”

He had particular praise for Shen Yun’s digital backdrop.

The backdrop puts each dance in vividly animated settings, combining heaven and earth into one, providing mesmerizing windows into completely different realms.

“I thought the dancing was very beautiful. The colours were very vibrant. It was choreographed very well,” said Chris Hammond, an insurance adjustor who processes complex claims.

“The orchestra was nice. It was nice to see that because they said there was a mixture of Western and Eastern music so they balanced each other very well. It was a good balance between each type of music.”

“It was very nice and different from what you see usually,” she said.

“It was very colourful. It’s not something that you would see in Western culture.”

Mr. Hammond took note of the work that went into the clothing.

Shen Yun describes on its website how its costume artists collect countless designs of traditional attire, ranging from those of the common people to emperors, and use bright colours to recreate the hundreds of pieces used each season.

One family of professionals was also moved by the show.

“The colours, the dancers, the designs, everything,” she said.

The couple’s daughter, Mariam Malaty, who is currently studying architecture, appreciated the work that went into the performance.

“I thought it was really nice—the colours and the dancers, how they organized it and how well it’s all prepared.”

New York-based Shen Yun Performing Arts has three touring companies that perform simultaneously around the world. Shen Yun’s New York Company will be in Mississauga until Dec. 23 before going to Ottawa and Montreal and other dates in Ontario, Quebec, and across Canada.For more information, visit ShenYunPerformingArts.org