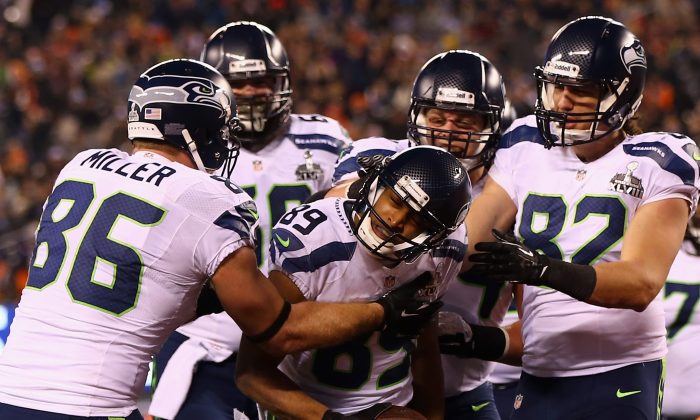 EAST RUTHERFORD, N.J.—The Seattle Seahawks ripped apart the record-breaking Denver Broncos offense to win, convincingly, their first Super Bowl 43–8. In a classic matchup of offense versus defense, the Seahawks, which led the NFL in both fewest yards and fewest points allowed, justified the old adage that defense wins championships.

Denver quarterback and newly minted NFL MVP Peyton Manning looked rattled all night and threw two interceptions. Seattle pressured him unlike New England and San Diego had. The Seahawks created four turnovers and didn’t turn the ball over once under the steady guidance of second-year quarterback Russell Wilson.

“It’s just a tremendous feeling. I can’t even explain it,” said the game’s MVP, Seattle linebacker Malcolm Smith. Smith exemplified the Seattle effort with an interception returned for a touchdown and a fumble recovery.

“We believed in our talent. We clicked on all cylinders,” said winning quarterback Russell Wilson. “Our defense was ridiculous!”

“They executed better than we did, we knew they were fast,” Manning said glumly.

“I don’t think it’s nerves,” Denver head coach John Fox said. “Give them credit. They [Seattle] had a lot to do with it and some of it was self-inflicted.”

One-Way From the Opening

Super Bowl XLVIII started inauspiciously for Denver conceding a safety on the first play from scrimmage.

It would be a sign of things to come.

A high snap sailed over Manning’s head and into the end zone marking the quickest scoring play in Super Bowl history (12 seconds). “It was a noise issue that caused that play to happen,” Manning said.

Seattle was all over Denver right from the get-go, limiting the Broncos to only 11 net yards in the first quarter. The Denver defense held up well initially and managed to prevent Seattle from reaching the end zone in the first quarter despite two red-zone possessions. Kicker Steven Hauschka had to settle for two early field goals.

“It was just a bad throw,” Chancellor said when describing his interception.

Seattle then drove down field and benefited from a defensive pass interference penalty in the Denver end zone. From the 1-yard line, Marshawn Lynch needed two tries to punch it in for the touchdown to give Seattle a 15–0 lead.

Not to be forgotten, being out-shadowed by the Seattle defense’s performance, was a very professional one put in by Wilson and the Seahawks offense. The unpredictable play calling kept the Broncos on their heels with Wilson’s scrambling and a good mix of runs and passes. Big play man Percy Harvin gave Seattle an added dimension.

“We had a really cool mix of stuff. We saw Percy [Harvin] flash and do a bit of this and that. Russell [Wilson] played a perfect football game for us. I don’t know, a 123-rating somebody told me, no picks, no turnovers, nothing,” Carroll said.

On the other side, a recurring theme was Denver starting to roll and then shoot themselves in the foot.

The Broncos finally made progress into Seattle territory with their biggest play up to that point being a 16-yard pass play to Wes Welker early in the second quarter. But shortly thereafter, Manning was under pressure from Cliff Avril who hit his arm as he attempted a pass. The “duck” of a pass was picked off and returned for a 69-yard pick-6 by Smith.

“We got pressure, we got turnovers. I didn’t think it was going to be a blowout but I thought we had a chance to win for sure,” Avril said.

He was part of a ferocious Seahawks defense that was writing a legacy of its own by dominating the NFL’s best offense of all time. Very quickly Seattle had extended its lead to 22–0 and the writing was on the wall for Manning and the Broncos. The largest Super Bowl comeback was one of 10 points.

Denver, under pressure to put some points on the board by the end of the first half, drove deep into Seattle’s territory once again, but Manning’s wobbly pass on 4th-and-2 fell incomplete.

More of the Same

The second half couldn’t have started worse for Denver when Harvin struck a dagger to Broncos’ hearts, returning the second half kickoff 87 yards for a touchdown giving Seattle a 29–0 lead.

“We had bounce-right, counter-right,” Harvin said about the play. “We knew it was a good chance. As soon as I caught the ball, it was open field.”

And the avalanche continued with Wilson finding Jermaine Kearse for a beautiful 23-yard catch-and-run touchdown play to extend the lead to 36–0.

Seattle’s defense collectively swarmed Denver. It was not about Richard Sherman or any individual player making a name for himself.

Denver saved itself from complete embarrassment when Manning found Demaryius Thomas for a 14-yard touchdown in the third quarter. But it was truly too little, too late.

The Seattle defense brought back memories of top-notch defensive units like the 2000 Baltimore Ravens and 1985 Chicago Bears that went on to lopsided Super Bowl wins.

“It’s a great group of guys out there playing for each other. We’re a fundamentally sound team, running and hitting, being great tacklers,” Chancellor said.

“That’s the way we play on defense. We play physical, we want to instill our will.”

Both Denver and Seattle came into the big game with identical 15–3 records after finishing atop their respective conferences. The game was widely expected to be a close one, but Seattle was just too good on this day.

The loquacious Richard Sherman summed it up: “Today, we just played sound football. We were able to execute and we did it. It was more about what our players did well [rather] than Peyton.”