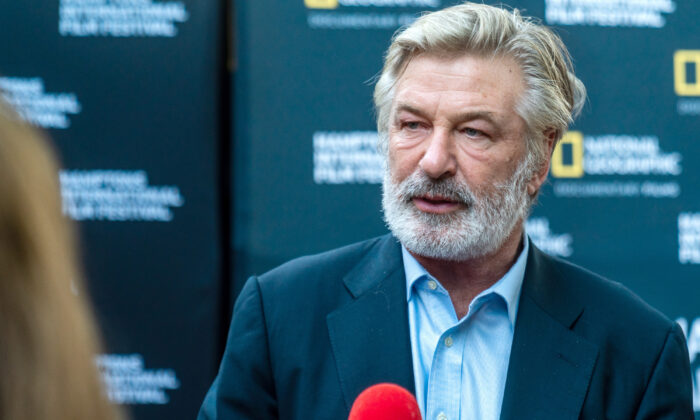 A judge on Thursday approved a police search warrant for Alec Baldwin’s iPhone after he was accused of having fatally shot cinematographer Halyna Hutchins on Oct. 21 on the film set of “Rust” in New Mexico.

“Affiant is requesting a warrant for the seizure and search of Alec Baldwin’s cell phone to search for any evidence relating to the death investigation of Halyna Hutchins,” said Sheriff’s Office Det. Alexandria Hancock in the warrant (pdf), approved by a Santa Fe court.

“Affiant believes there may be evidence on the phone, due to individuals using cellular phones during and/or after the commission of crime(s). Such information, if it exists, may be material and relevant to this investigation. Affiant was also made aware there were several emails and text messages sent and received regarding the movie production ‘Rust’ in the course of interviews.”

The affiant, a female, currently serves as a violent crimes detective in the Criminal Investigation Division of the Santa Fe County Sheriff’s Department, and has had four years of law enforcement experience, according to the warrant.

Hutchins, 42, was airlifted to a hospital following the shooting and died of her gunshot wound to the chest. “Rust” director Joel Souza, 48, received emergency care at a separate hospital for his gunshot wound in the shoulder.

Baldwin, 63, said he was told that an antique pistol he was given for the scene rehearsal on Oct. 21 was not loaded. In an interview with ABC’s George Stephanopoulos that aired Dec. 2, Baldwin, the film’s producer, said he did not pull the trigger on the gun when it went off.

When asked how a live round ended up on the set, he responded: “I have no idea. Someone put a live bullet in a gun, a bullet that wasn’t even supposed to be on the property.”

“Someone is responsible for what happened, and I can’t say who that is, but it’s not me,” he said.

Both Baldwin and his wife, Hilaria Baldwin, deleted their Twitter accounts days after the ABC interview. They still appear to be active on Instagram.

The search warrant’s approval comes about a week after Baldwin was seen in public for the first time—he was the master of ceremonies at the Robert F. Kennedy Human Rights 2021 Ripple of Hope Gala in New York City.

Since the deadly shooting, Baldwin has been sued by a script supervisor and a crew member in two separate lawsuits.