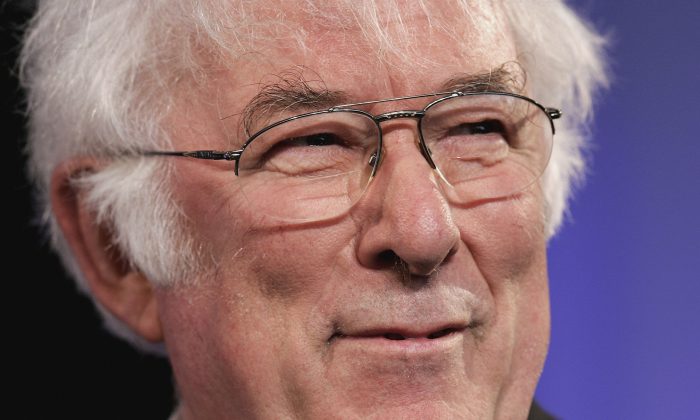 Seamus Heaney, a renowned Irish poet praised by some as the best since William Butler Yeats, was remembered as a bard and as a “powerful voice for peace,” at his funeral in Dublin on Monday.

Former U.S. President Bill Clinton said Heaney was a “powerful voice for peace,” according to Sky News. Also in attendance among the hundreds that gathered at the Sacred Heart Church were Bono, other members of U2, Irish Prime Minister Enda Kenny, and Irish President Michael D Higgins, reported the BBC.

Heaney, 74, left behind his wife Marie and his children Michael, Christopher, and Catherine Ann, when he died unexpectedly of a short illness in hospital on Friday.

Michael revealed at the funeral his father’s last words to Marie, sent via text message: “Noli timere,” Latin for “Don’t be afraid.”

Ireland’s foremost uilleann piper, Liam O’Flynn, played a wailing lament before family members and friends offered a string of readings from the Bible and their own often-lyrical remembrances of the country’s most celebrated writer of the late 20th century. The 90-minute service ended with a cellist’s rendition of the childhood bedtime classic, “Brahms’s Lullaby.”

Heaney won the Nobel Prize for literature in 1995 in recognition of his wide-ranging writings inspired by the rural wonders of Ireland, the strife of his native Northern Ireland, the ancient cultures of Europe, of Catholic faith and Celtic mysticism, and the immutability of family ties.

One of the poets who read prayers to the mourners, Theo Dorgan, said many lovers of poetry worldwide had expected Heaney to live much longer, given his strong mind and masculine vigor. He noted that Heaney had resumed worldwide readings and seminars following a 2006 stroke.

Dorgan said: “A great oak has fallen. A lot of people sheltered in the amplitude of the leaf and light and shade of the oak that was Seamus.”