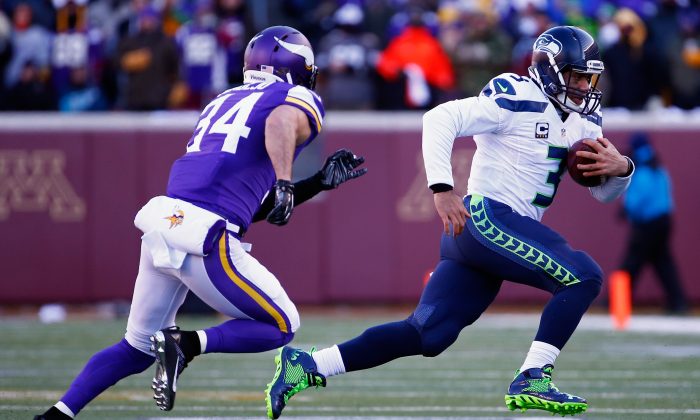 Seahawks Not Fazed by Bitter Cold in Minnesota

The Seattle Seahawks and Minnesota Vikings battled each other and the extreme cold in a fascinating NFC Wild Card game on Sunday.

Yes, the game will go down in infamy for Blair Walsh’s shank of a potential game-winning 27-yard field goal, but it was also the third coldest game in NFL playoff history.

The temperature at the start of the game at TCF Bank Stadium in Minneapolis was -6F (-21C) with a -25F (-32C) windchill. It was sunny and not that windy, but in those conditions, frostbite can occur in 30 minutes.

It looked like everybody was vaping—small puffs of white breath appearing and disappearing. It was surreal. Rarely does an outdoor sporting event take place in this kind of cold.

“This was really a survival game for both teams,” Seahawks head coach Pete Carroll said.

“The turf was the thing that was cold,” Chancellor told NBC postgame. “It was one of the coldest games I’ve ever played in, but it was a lot of fun as well, just not worrying about the cold and having fun with your teammates.

“That was the fun part about this whole game and making history. It’s a mental battle—tuning out the elements and being at your best.”

The cold didn’t bother Vikings quarterback Teddy Bridgewater, but he was unable to lead a touchdown-scoring drive.

“We were warm for the most part,” Bridgewater said. “Especially on the sideline with the heated benches and everything. Then you go out there on the field and it’s all a mental thing. It didn’t affect us at all.”

NBC commentator and former Pittsburgh Steelers wideout Hines Ward played in the 2005 AFC Championship game when the temperature was a warmer 11F  (-12C) with a -1F (-18C) windchill.

“You have to be mentally strong. As a wide receiver, you’re not going to get many opportunities in these conditions to catch the football,” said Ward in his pregame analysis.

In such cold conditions, the air pressure in the football drops, which takes a few yards off the kicking game. Teams tend to get more conservative in their play-calling.

In the second quarter, the Seahawks elected to go for it on 4th-and-13 from Minnesota’s 30-yard line instead of kicking a field goal. In “normal” weather, it’s a no-brainer to kick a FG. No wonder the halftime score was 3–0—the lowest since January 2000.

Seattle didn’t throw the ball downfield very much in the early going and was slowly getting grinded down by Minnesota, who took a 9–0 lead into the fourth quarter.

This was really a survival game for both teams
— Pete Carroll

The extreme cold had its grip on the game, but special players who make big plays weren’t going to be stopped. Others weren’t able to step up.

The Vikings offense runs through the league’s leading rusher Adrian Peterson. But he had his worst game of the season with a 2.0 yards per carry average and a costly fumble in the fourth quarter.

Seahawks QB Russell Wilson, who doesn’t wear gloves, took three quarters to “warm up,” despite hand-warmers in his pouch. In the game’s key play, Wilson retrieved the fumble off a high snap, scrambled, and found Tyler Lockett for a 35-yard gain. That play led to the game’s only touchdown.

The coldest game in NFL history, dubbed the “Ice Bowl,” was played Dec. 31, 1967 at Lambeau Field in Green Bay, Wisconsin. The official temperature was -13F (-25C) with a -48F (-44C) wind chill; at one point during the game, the thermometer showed -15F (-26C). The game was the old NFL Championship game between Green Bay and Dallas, just half a month before Super Bowl I.

The coldest wind chill in an NFL game took place at Cincinnati’s old Riverfront Stadium on Jan. 10, 1982. While the temperature was -9F (-23C), the wind chill dropped to -59F (-51C) due to a consistent 27 miles per hour wind. Known as the “Freezer Bowl,” it’s the second coldest NFL game of all time.

NBC color commentator Cris Collinsworth played in that game and said, “The first time I got hit that game, it was like somebody took a sledgehammer to a mirror. Pieces of me fell all over the field.”

Newton, Panthers the Class of NFL

The NHL has been playing outdoor games since 2003 and that inaugural Heritage Classic at Edmonton’s Commonwealth Stadium between Montreal and Edmonton had a frigid 0F (-18C) temperature at puck drop.