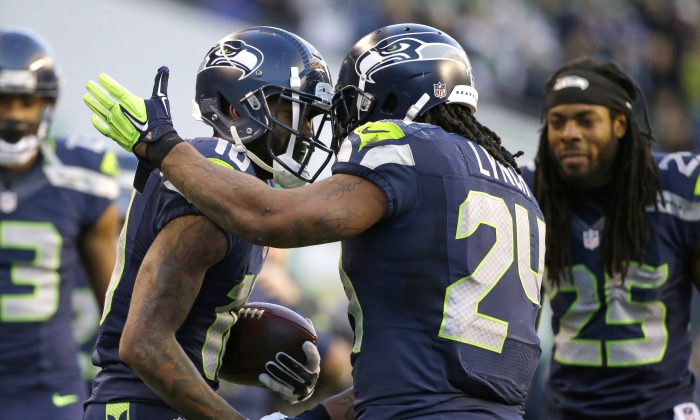 Seattle Seahawks wide receiver Paul Richardson, left, is congratulated on his first NFL touchdown by teammate Marshawn Lynch, center, as Richard Sherman looks on at right in the second half of an NFL football game against the San Francisco 49ers, Sunday, Dec. 14, 2014, in Seattle. (AP Photo/Elaine Thompson)
NFL

The Seattle Seahawks play the Cardinals in Arizona on Sunday night. Here’s some of the latest updates:

Richard Sherman was quieter this season after his team eliminated the 49ers from playoff contention on Sunday.

He wasn’t please the 49ers scored a touchdown on the No. 1 defense.

“We’ve got to clean that up,” Sherman said, via SFGate.com. “We had them on fourth down. We should have stopped them on that drive. … Their passing game wasn’t really effective today. They shoulda got nothing.”

Russell Wilson has broken the record for most regular-season wins for a quarterback in his first three years.

“I think it means something, for sure,” Wilson said, per the Seahawks website. “At the end of the day, it comes down to winning football games. That’s my ultimate goal, to find ways to win. Whatever it takes, whether if it is having to throw for a bunch of yards, or finding a way at the end of a game in two-minute situations, or if it’s having to run the football and sustain drives.”

He added that it’s a team effort.

“More than anything, it’s a tribute to my football team,” he said. “What the guys are doing. What we’re doing as a collective effort. The defense, the offense, special teams. It’s been a lot of fun and we’ve learned a lot. We’re still a young football team, we’re still learning, we’re still growing.”

Seahawks offensive tackle Russell Okung will be out for one or two weeks with a bruised lung.

According to the Seattle Times, he took a big hit on Sunday during the final play of the first half.

Coach Pete Carroll said he’s not sure if he’ll play against Arizona next week.

Okung was also seen shoving a trainer on the sideline.

Carroll said, “I think he was just frustrated with the fact he couldn’t go back in.”

Meanwhile, center Max Unger, who suffered a knee/ankle injury is still “day to day” and it’s unclear if he’ll play next week.

“We’re going to wait and see,” Carroll said, according to Seahawks.com. “Max made it through some practice reps last week, but he’s not all the way back yet. We’ll have to find out how this week turns out, don’t know. Of course, he wants to get back desperately.”

Bobby Wagner, the Seahawks linebacker, is playing better since he’s been back.

He got a team-high 10 tackles and got one of six Seattle sacks on Sunday.

“He’s playing way better than he has at any time. He’s more physical. Every game he has six or eight tackles and they’re really good, solid thumping tackles. It’s really a great spot, part of his game right now. It’s cool to see it happening.”