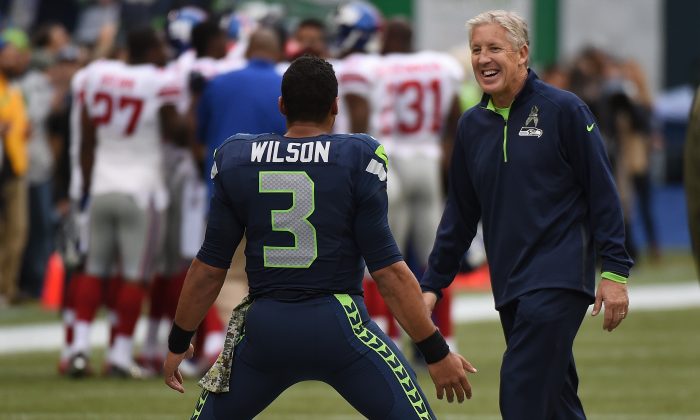 Pete Carroll chats with Russell Wilson as he warms up before the game against the New York Giants at CenturyLink Field on Nov. 9, 2014 in Seattle. (Steve Dykes/Getty Images)
NFL

Seahawks Have Shot at NFL Immortality in Super Bowl

It’s not often a defending Super Bowl champion reaches the big game again the following season. After comprehensively dismantling Denver last year, the Seattle Seahawks have a chance to take a special place in NFL history. And their opponent on Feb. 1 in Arizona is the franchise everybody thinks of when it comes to modern day NFL juggernauts—the New England Patriots.

Seattle is attempting to do what no team has done since the 2004 season, namely repeat as Super Bowl champions. The last team to do it was, of course, New England, led by head coach Bill Belichick and quarterback Tom Brady.

The Patriots and Seahawks haven’t faced each other since Oct. 2012, a game Seattle won 24–23. Seattle has had the NFL’s best overall defense and pass defense now for two straight seasons, so Tom Brady hasn’t faced a secondary quite like this “Legion of Boom.”

Seattle’s strength is its defense and it kept the team in the game against Green Bay last Sunday. Despite being utterly dominated in the first half, the Seahawks were only down 16–0. It could have been much worse had the Packers been able to score touchdowns on two trips to the red zone in the first quarter.

The Seattle defense rivals the best defenses of the past 30 years—the 2000 Baltimore Ravens defense and the 1985 Chicago Bears defense. It seeks its own special place in NFL history.

Getting to the Big Game

The Super Bowl’s once again a battle between the top two seeds in each conference. Last year, Seattle and Denver both finished the regular season 13–3 and this year Seattle and New England were both 12–4. Both teams also overcame some early season wobbles and finished strongly.

Seattle was 3–3 after two straight losses in October and the doubters were gaining in confidence. But the Seahawks won nine of their remaining 10 regular season games and two playoff games to reach the Super Bowl.

New England fell to 2–2 after a crushing Monday night defeat in Kansas City. Brady had his worst game of the season and big questions were asked about him and the team’s credentials. Sure enough, the Patriots won 10 of their remaining 12 games. (The loss to Buffalo in Week 17 “deserves” an asterisk as they had already wrapped up the AFC’s No. 1 seed.)

But Seattle and New England couldn’t have reached the big game in more different ways last weekend. The Seahawks came from behind to knock off the Packers in one of the most memorable games of all time, while the Patriots simply overwhelmed the Colts.

This iteration of the Seattle Seahawks can be more than just another Super Bowl champion. They can go down in history along with the Belichick/Brady Patriots of the early 2000s, the John Elway-led Denver Broncos of the late 90s, and the Troy Aikman-led Dallas Cowboys of the early 90s just to name a couple of other iconic teams from the last 25 years.

There’s a long list of Belichick/Brady accomplishments and records over their time together, but Carroll/Wilson have begun their partnership similarly.

In their first full season together, back in 2001, the Patriots won the Super Bowl. By the end of the 2004 season, New England, led by Belichick/Brady had won three Super Bowls in four seasons.

Carroll came on board in 2010 and Wilson’s first season was 2012. It took Carroll/Wilson one year to get warmed up, making the playoffs but bowing out in the divisional round. And in their second year together, the Seahawks took care of the Broncos in New Jersey.

The expectation is now for the Seahawks to be a perennial playoff team, just as it has been the case in New England for over a decade. But getting to the playoffs is one thing—winning Super Bowls is what makes a team special.

For Seattle’s to secure its special place in NFL lore, it must go through New England, led by the most special head coach-quarterback duos of all time.