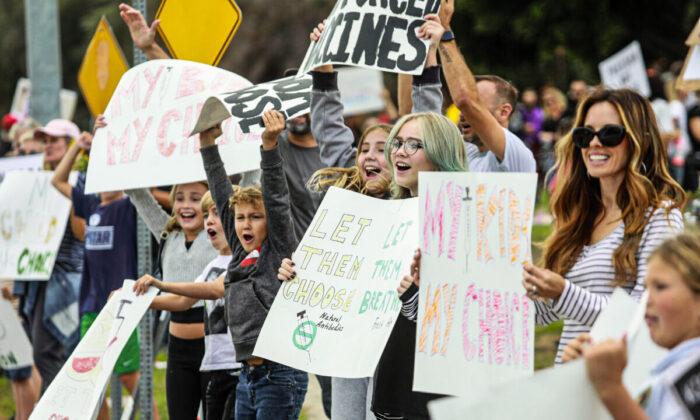 The Supreme Court is considering whether it should intervene in the case of a San Diego high school student who claims that the local school district’s COVID-19 vaccination mandate imposed on students unconstitutionally discriminates against her by not offering a religious exemption.

Lawyers from the Thomas More Society, a national public interest law firm focusing on religious freedoms, filed an emergency application with the high court on Dec. 10 asking it to block the mandate. The court then ordered the San Diego Unified School District to respond to the application by Dec. 16.

On Dec. 4, the U.S. Court of Appeals for the 9th Circuit refused to block enforcement of the mandate, even after granting vaccination exemptions to others. The appeals court held that the district mandate, which allows for medical exemptions but not religious or personal belief exemptions, was doing what was best for students. One court had blocked the mandate on Nov. 28 but the injunction was lifted after the school district modified its policy.

The new Supreme Court application came as the high court refused a Dec. 13 emergency application from 17 doctors, nurses, and other medical professionals who sought to pause New York’s tough vaccine mandate for health care workers on the ground that the state’s governor has been waging what they called “a veritable religious crusade to force medical professionals to be vaccinated.” The Epoch Times reported on the case a month ago.

The justices split 6–3 on the application in Dr. A v. Hochul, court file 21A145, with Justices Clarence Thomas, Neil Gorsuch, and Samuel Alito dissenting from the denial of injunctive relief. Gorsuch wrote a 14-page dissenting opinion stating that the applicants were not “‘anti-vaxxers’ who object to all vaccines.” They say they can’t accept the COVID-19 vaccine “because their religion teaches them to oppose abortion in any form, and because each of the currently available vaccines has depended upon abortion-derived fetal cell lines in its production or testing.”

Paul Jonna, a partner at LiMandri and Jonna LLP and special counsel for the Thomas More Society, discussed the new application with The Epoch Times.

Jonna said he wasn’t happy with the Supreme Court’s ruling in Dr. A v. Hochul, and that the court got it wrong in May 2020 in refusing to intervene when the San Diego-based South Bay United Pentecostal Church challenged California Gov. Gavin Newsom’s emergency public health orders that prohibited churches from holding indoor worship services, imposed limits on how many people could attend services, and prohibited singing during services.

But this new application is on a strong legal footing, the lawyer said.

“I don’t think it’s a tough case at all. I think that it’s a slam dunk of a case. I mean, if the Supreme Court won’t get involved with these facts, then I’m not sure what vaccine mandate case they’ll ever get involved in,” Jonna told The Epoch Times.

It’s already “egregious” to mandate vaccination for health care workers without religious exemptions, and even more so to mandate it “on little kids,” he said, while noting that it’s “a good sign” that the Supreme Court has agreed to look at the application.

“I don’t want to read too much into it, but I do think it’s a good sign [given that] sometimes these applications are just summarily denied.”

The case is dealing with a disease that “is less harmful to kids than the regular flu,” Jonna said.

“Most of the teachers are fully vaccinated, and there’s just no justification for a mandate on school children. I think the court has to draw a line.

“It’s one of the only school districts in the entire country that’s forcing this vaccine, enforcing it with no religious exemption on kids. And the science is very overwhelmingly clear. According to our preeminent experts, that there’s just no justification medically.

“Unlike almost every school district in the country, San Diego Unified School District requires its students to be vaccinated to attend classes in person. Yet it provides secular exemptions for over 85 percent of its students. But it does not allow students any religious exemptions.”

San Diego Unified School District officials didn’t respond to a request by The Epoch Times for comment by press time.