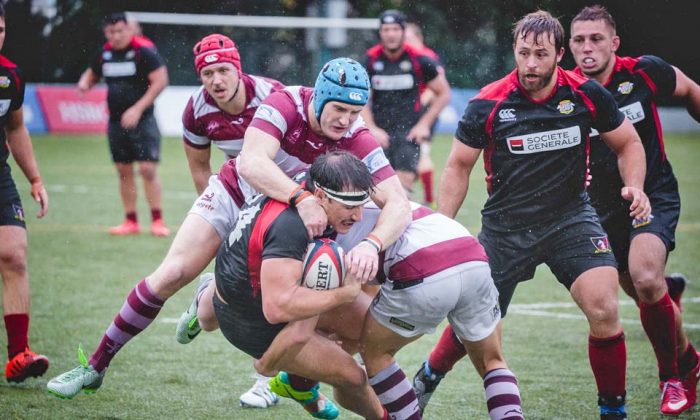 This Valley attack is held up by strong defense by Kowloon in the HKRFU Premiership match at King's Park on Saturday Nov26, 2016. (Dan Marchant)
HK Rugby Union

The appalling weather made it tough for players and spectators alike, with rain sheeting down, and the wet and windy conditions, dictating safe rather than expansive rugby. After 20 minutes, Scottish had edged into a 3-0 lead, with a penalty by Gregor McNeish. Although Scottish controlled the game, created some opportunities, through flanker Ewan Miller, they could not translate that into points, due to the dogged Tigers defense and the slippery conditions.

Just before halftime Scottish pressure was finally rewarded with a try from captain Kane Bouchart, converted by McNeish, giving Scottish a 10-0 lead at the end of the first half.

In the second half, Tigers fought back but could not get points on the board: and the scores of the half came from the boot of McNeish, with two penalties, giving Scottish victory 16-0.

Both sides did their best in atrocious conditions, with Scottish deservedly winning.

In the earlier match that afternoon, Kowloon defied the odds and beat Valley 20-13 at Kings Park. It is Valleys second loss of the season, and Kowloon’s third win. It was a game Kowloon controlled from start to finish. They scored two first half tries, from James Cunningham and James Sawyer, to establish a 14-0 lead, both converted by Jack Neville. Ben Rimene clawed a penalty back for Valley just before halftime, making the score 14-3 at the break.

Valley began stronger in the second-half; a penalty try and another penalty from Rimene, reduced the deficit to 14-13. Kowloon held their nerve in the final quarter, and two more penalties from Neville extended their lead to 20-13, to secure victory, and make the Championship a far more open and interesting contest.

The match between Natixis HKFC and Herbert Smith Freehills HKCC was postponed, and only two matches were played on Saturday. The results mean Scottish is joint top of the Championship with 23 points, level with Valley, but with slightly inferior points difference. HKCC remain third on 14 points; Kowloon fourth on 13 points; HKFC fifth on 12 points, and finally Tigers on 9points.