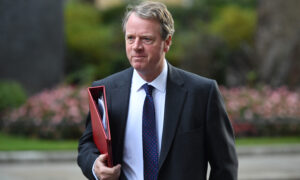 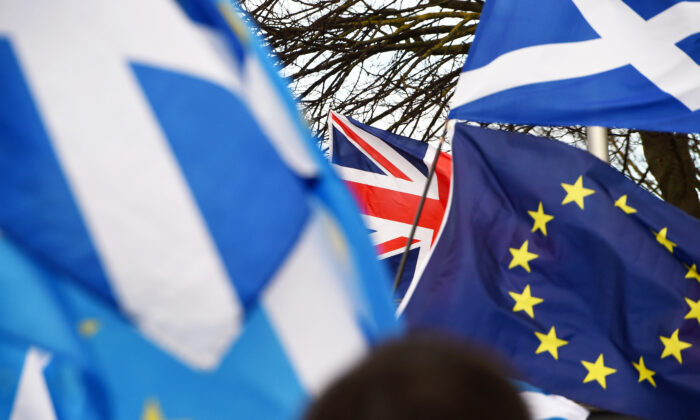 Pro-Union activists wave a Union flag (C) as Scottish Saltire and EU flags fly during an anti-Conservative government, pro-Scottish independence, and anti-Brexit demonstration outside Holyrood, the seat of the Scottish Parliament in Edinburgh on Feb. 1, 2020. (Andy Buchanan/AFP via Getty Images)
UK

Holyrood and Stormont on Wednesday voted to reject the UK-EU trade deal, which on the same day was approved in both the UK Parliament and Brussels.

Both motions say that Brexit is against the will of the people they represent, and both parties that tabled the motions complained about not having enough time to read the deal.

The original motion in Stormont, which was approved by MLAs, was a one-line motion tabled by the First Minister Arlene Foster that “noted” the Brexit deal.

An amendment sponsored by two Social Democratic and Labour Party (SDLP) MLAs was adopted, with 38 Unionist MLAs voting “no,” and 49 Nationalist and other MLAs voting “aye.”

The amendment added to the motion that the Brexit deal means “new barriers to trade and other negative consequences for Northern Ireland’s economy and society,” and that the Northern Ireland Assembly “rejects Brexit, in line with the democratically expressed view of the people of Northern Ireland.”

Therefore, Stormont calls for the implementation of the Northern Ireland Protocol, and declines “legislative consent to the British Government to impose the European Union (Future Relationship) Bill, their inferior trade deal, and their Brexit against the will of the people of Northern Ireland.”

Matthew O’Toole, who sponsored the amendment, said the deal was rushed through the UK Parliament.

“The Northern Ireland Assembly today voted to reject Brexit, but also explicitly to refuse legislative consent for the deal that Boris Johnson has just ram-roaded through the Westminster,” O’Toole said.

“We’ve been opposed to Brexit from the very beginning. We’ll keep opposing it and we’ll keep fighting for the interest of all the people of Northern Ireland and for a European future for our citizens and for our young people,” he added.

The motion recognises that a no deal Brexit “must be avoided,” but says the current deal would “cause severe damage to Scotland’s environmental, economic, and social interests.”

It also says that too little time was given to the UK Parliament and devolved legislatures to scrutinise the deal.

Therefore, the motion says, the Scottish Parliament “does not consent to the European Union (Future Relationship) Bill,” and “calls on the UK Government to seek a pause in current implementation while special arrangements are made to take account of these difficulties for Scotland and for the many others that will become apparent as the Bill is more fully considered.”

Sturgeon’s motion was passed by 92 votes to 30, all along party lines.

Twenty-nine Scottish Conservative and Unionist Party MSPs and one independent MSP voted against the motion. All Scottish National Party (SNP), Liberal Democrats, Labour, Green, and two independent MSPs voted for the motion, except for one abstain from the SNP, and a few who didn’t vote.

An amendment sponsored by Conservative MSP Ruth Davidson, which was rejected by MSPs, also along party lines, says that the UK had left the European Union in January.

It says that Holyrood “recognises that the First Minister has described an exit from the EU without such an agreement as ‘catastrophic’ for Scotland; notes that the only way to avoid such a no-deal outcome is to support the deal that has been agreed.”

On Dec. 11, Sturgeon told CNN in an interview that she was worried because a no-deal Brexit seemed to be the “overwhelming likelihood,” and that she was remaining hopeful “because no-deal would be catastrophic.”

The Brexit deal was reached between the UK and the EU on Dec. 24.

On Dec. 30, the UK’s House of Commons approved the deal by 521 votes to 73, mostly along party lines, after five hours of debate.

The two major parties, Conservative and Labour voted for the deal, while the other parties, including the SNP, voted against it.

David Linden, an SNP MP, questioned the procedure. In a point of order, he asked why the Parliament was “forced to debate this charade of a bill in five hours,” and that no MPs could speak during the committee of the whole house. He also questioned why the 14 pages of amendments tabled by MPs were not to be considered.

Deputy Speaker Eleanor Laing replied that although this was a “perfectly reasonable question,” the schedule of the debate had been agreed by MPs.

Laing went on to say that the bill was taken in “unusual circumstances”—one day before the end of the Brexit transition period.

“At this time, [the bill] can only be either rejected or passed in its entirety, and therefore the opportunity for any change has long passed,” she said.

“And the honourable gentleman cannot possibly argue that these matters have not been discussed and argued at length and in depth for many years,” she added. “Indeed, the right hon. gentleman at the back there might say, for decades.”

In the Brexit referendum in 2016, the whole of the UK voted to leave the EU by a small margin, but results in Scotland and Northern Ireland were to remain in the bloc.

In the 2019 general election, Johnson’s Conservative Party, which had the campaign slogan “Get Brexit Done,” won an overwhelming majority in Westminster, while Sturgeon’s nationalist SNP won by a landslide in the Scottish Parliament.

On Dec. 27, SNP declared it would vote against Johnson’s Brexit deal, continue to pursuit Scottish Independence and to rejoin the EU afterwards.

The future of Northern Ireland is also uncertain, as it is feared that Brexit may trigger yet another push for a united Ireland.