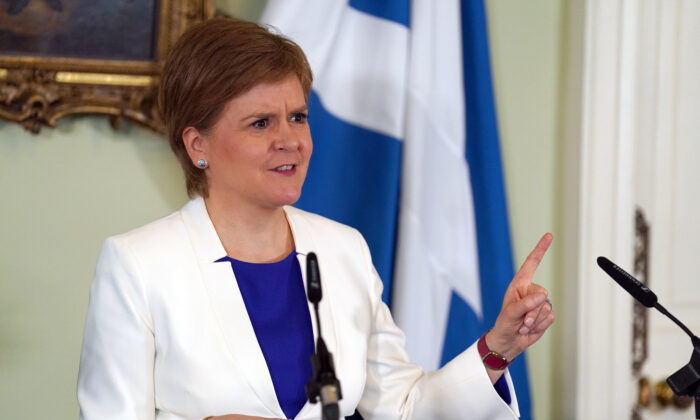 Scottish First Minister Nicola Sturgeon has pledged to scrap the verdict of “not proven,” which is unique to Scotland and dates back to the 17th century.

But the Law Society of Scotland said it was “deeply concerned” about the announcement and Thomas Ross, QC, a defence advocate in Glasgow, told The Epoch Times the evidence used to justify the decision did not stack up.

In Scotland there are three possible verdicts open to a jury: guilty, not guilty, or not proven.

Although the consequences of not guilty and not proven are the same—the defendant is acquitted and is released—campaigners have claimed not proven is disproportionately used in rape cases and say it has a harmful effect on rape complainants.

Rape Crisis Scotland say not proven makes up 44 percent of rape and attempted rape acquittals, compared with 20 percent for all crimes and offences.

Sturgeon told the Scottish Parliament on Tuesday, “This will be a change of truly historic significance in Scotland, and one firmly intended to improve access to justice for victims of crime.”

The campaign to scrap the verdict of not proven was launched in 2018 by the campaign group Rape Crisis Scotland and Miss M, a student at St. Andrew’s University, who claimed Stephen Coxen raped her while she was too drunk to give consent.

In 2015 a jury found the case against Coxen not proven, but three years later she won £80,000 ($91,500) in damages from him after taking a civil action against him at the Personal Injury Court in Edinburgh.

Miss M told The Epoch Times, in a direct message on Twitter, on Wednesday: “I welcome the decision to scrap the not proven verdict. The research has shown it is misunderstood and is used disproportionately in rape cases.”

Miss M said: “Survivors and their families have spoken up to share what life with a not proven verdict is like—there is no end to the legal process, a decision was not made … I’m glad the Scottish government has listened to those with lived experience about the devastating effect the not proven verdict has on our future.”

But Ross said, “Nicola Sturgeon is under pressure from various interest groups who said that not enough people were being convicted of rape and to do something about it, without thinking it through.”

He added: “It doesn’t make sense. There is no reason to think that every not proven verdict we have had in Scotland would not have been a not guilty verdict. So it would have made no difference.”

He said the not proven verdict had always been a “balancing mechanism” to even out the fact that, unlike in England, a defendant can be convicted by a simple majority of jurors.

He told The Epoch Times: “It makes sense to people who are involved in trials that there should be a not proven verdict. If a case is not proven beyond reasonable doubt you can find the case to be not proven. It’s unique. If it has to go we should get rid of simple majority verdicts.”

‘Likely Have Little or No Effect on Conviction Rates’

Neil Hay, a Scottish solicitor-advocate, told The Epoch Times in a direct message: “A key point here is that pressure groups representing complainants and the government believe that abolition of the not proven verdict will enhance conviction rates in cases of sexual and domestic violence. This link is probably false, when account taken of conviction rates in jurisdictions without the not proven verdict.

“The thrust of the argument to abolish not proven is therefore only presentational, and will likely have little or no effect on conviction rates in practice.”

Murray Etherington, president of the Law Society of Scotland, said the “upmost care and consideration” had to be taken when making such a “fundamental change” to Scottish law.

England and Scotland were separate countries until 1707 and when the United Kingdom came into being Scotland was allowed to keep its own laws, which have always been distinct and different to English law.

Originally Scotland had two verdicts—proven and not proven—but in 1728 a murder trial jury decided to declare James Carnegie not guilty of murder and since then Scottish juries have been able to deliver verdicts of guilty, not guilty, or not proven.