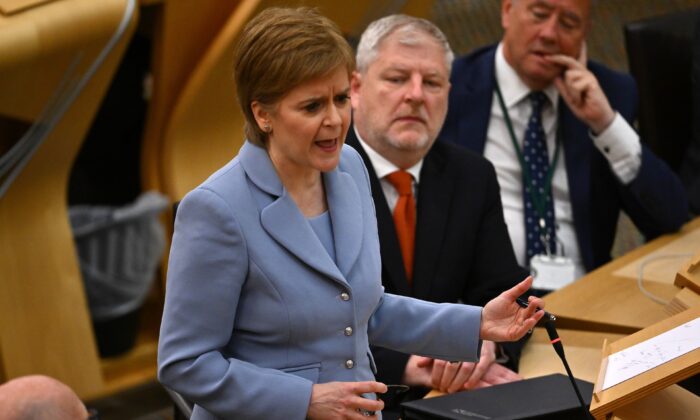 A Scottish Conservative MP has described the Scottish government’s plans to pursue a second independence referendum as a “desperate last throw of the dice.”

But First Minister Nicola Sturgeon, who is also leader of the pro-independence Scottish National Party (SNP), announced on Tuesday she is planning to hold another independence referendum on Oct. 19, 2023.

Andrew Bowie, a Conservative lawmaker who represents West Aberdeenshire and Kincardine in the UK Parliament, told the BBC that time should be spent talking about “much bigger issues” than the constitution.

Bowie said: “No poll suggests that the people of Scotland want independence. No poll suggests even people who want independence want a referendum next year and we should be spending our time talking about much bigger issues rather than constitutional game playing and dancing to the first minister’s tune with this desperate last roll of the dice which is what this is, frankly.”

He said now is “not the time” to hold another referendum, and accused the SNP-led administration of “taking their eye off the ball.”

Sturgeon claimed her government has an “indisputable democratic mandate” for another referendum, but Prime Minister Boris Johnson said the UK government will not grant the Section 30 Order, which is required to hold a second vote.

The Scottish government has asked the UK Supreme Court to rule on the potential legal issues around holding a vote without UK government approval.

In the event the court rules the proposals are outside of the legislative competence of the Scottish Parliament, Sturgeon said the next general election will become a “de facto referendum” on independence.

Douglas Ross, the leader of the Scottish Conservatives, said Sturgeon’s “selfish obsession” with another “divisive” referendum has taken precedence over issues such as the cost-of-living crisis and hospital waiting times.

“A potentially illegal referendum next year is the wrong priority for Scotland,” he said. “We won’t play Nicola Sturgeon’s games. We won’t take part in a pretend poll when there is real work to be done.”

But Sturgeon told ITV’s “Good Morning Britain” on Wednesday that “the time is right for Scotland to debate and decide independence because we have been taken down the wrong path by Westminster governments.”

She argued that at a “key moment in history,” Scotland would fare better if it was able to make its own decisions.