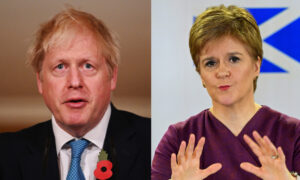 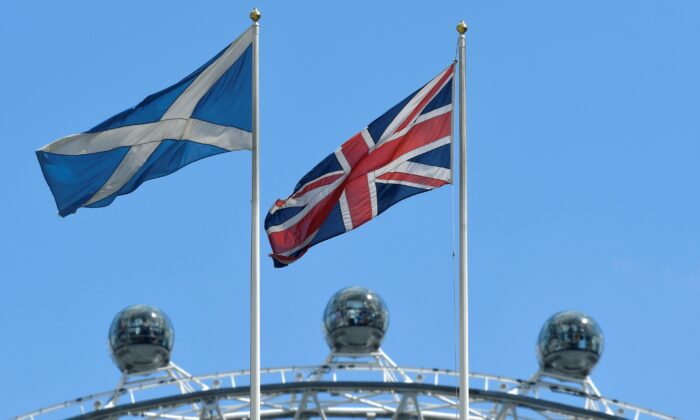 The Scottish Saltire flag flies next to the British Union Jack flag with the London Eye wheel seen behind in London, Britain, on July 29, 2019. (Toby Melville/Reuters)
UK

LONDON—Scotland’s top civil court has dismissed a case which sought a ruling that the Scottish parliament could hold an independence referendum without permission from London, saying it was premature and hypothetical.

Independence campaigner Martin Keatings wanted legal backing for his argument the Scottish parliament had the authority to hold a new vote on secession without the explicit approval of the United Kingdom government.

But Judge Ailsa Carmichael at Scotland’s Court of Session ruled the question was hypothetical, academic, and premature, without the need to express a view on the legal issues it raised.

Scots rejected independence by 55 percent to 45 percent in a 2014 referendum and the ruling Scottish National Party have said they will seek a second plebiscite should they, as expected, win May’s elections to the Scottish parliament.

Prime Minister Boris Johnson has ruled out allowing another plebiscite, saying the vote seven years ago was a “once in a generation” event.

Keatings’s case was that no permission was needed and that any referendum bill passed by the Scottish parliament would be legal.

The decision is a blow to nationalists, albeit a result that was expected by law experts and anticipated by Keatings himself who has indicated he would appeal.

“Whatever the judgement is (because we’ve not seen it), it’s important to know that it’s likely going to end up in the inner house appeals court next,” Keatings said on Twitter ahead of the judgement.