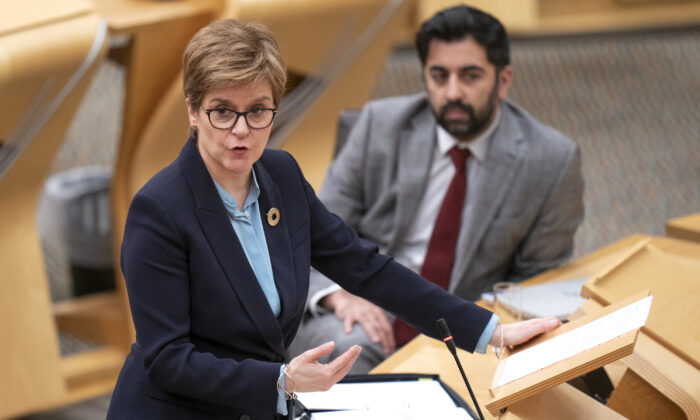 A mock trial staged to highlight racially aggravated hate crimes has caused some to question if Scottish authorities are readying a newly-enacted yet still-dormant hate crime law, which has been described as the most “illiberal and censorious bill in any liberal democracy in the world.”

While not explicit, a mock trial could be seen as a practice run for the Hate Crime and Public Order Act, which has been called “vague,” “censorious,” and “Orwellian” by a broad range of free speech groups.

The Scottish Government told The Epoch Times by email that it is working closely with justice partners, including Police Scotland, to “implement the Act as soon as possible to enhance protections to those targeted by hatred and prejudice.”

“We will publish a new Hate Crime Strategy which will set out our priorities for tackling hate crime in Scotland and support implementation of the Act,” it added.

Last Wednesday, 50 guests from local agencies such Police Scotland, NHS Greater Glasgow and Clyde, and Scottish Fire and Rescue, went to the mock trial, which saw real authorities playing a variety of roles to demonstrate the process.

A spokesman for the Crown Office and Procurator Fiscal Service (COPFS) told The Epoch Times that “hate crime has damaging consequences for individuals, our communities and society as a whole” and that “COPFS takes very seriously its responsibility to protect the public from this offending.”

“We attended this event to raise awareness of the legislation on race-related hate crimes and how these offences are prosecuted,” he added.

He did not comment on whether the mock trial was carried out to specifically raise awareness for the new act and said it was a “general piece of engagement to demonstrate the trial process for non-legal stakeholders.”

Common law and continental jurisdictions scholar and adviser to the Free Speech Union Andrew Tettenborn told The Epoch Times that he believes the event’s objective was to persuade people to report hate crimes.

“To my mind, it’s pretty clearly intended, at least partly, as a consciousness raising exercise for the act,” he said.

The Police Scotland website encourages everyone to report incidents of hate that they experience or witness.

The Scottish National Party’s bill, introduced by the former Scottish Justice Secretary Humza Yousaf, was approved by the Scottish Parliament in 2021 and has received Royal Ascent, but has been dormant since. The bill has been criticised as authoritarian because it could place further restrictions on what can and cannot be said in a public forum.

The Scottish Government says the new act is designed to make hate crime law “fit for the 21st century” and defines hate crime as the phrase used to “describe behaviour which is both criminal and based on prejudice.”

“Stirring up hatred offences” will apply to characteristics listed which include age, disability, religion, sexual orientation, transgender identity, and variations in sex characteristics, which some argue will clash with the expression of views on all manner of subjective beliefs.

At one point, Yousaf said he intended to clamp down on so-called hate speech inside the home.

In England, there is no such thing legislatively as a “hate crime,” but rather there are several pieces of relevant legislation (pdf) under which people can be prosecuted for offences towards protected characteristics, such as the Communications Act 2003 or the Public Order Act 1986.

Stuart Waiton, senior lecturer in sociology and criminology at Abertay University, told The Epoch Times by email that the mock trial was “unusual.”

Waiton is part of the campaign group Free to Disagree, which highlights the threat that the act poses to free speech, and has called it the most “illiberal and censorious bill in any liberal democracy in the world.”

In his submission to the consultation on the bill, he argued that the term “hate crime” is “political and polemical, rather than legal, and has no place in law.”

He also pointed out that the idea of criminalising hate speech first emerged in Joseph Stalin’s Soviet Union, where in 1936 the constitution allowed “any advocacy of racial or national … hatred … [to be] punishable by law.”

Referring to the mock trial, Waiton said he suspected it “is something of a publicity stunt, and it seems unusual, not least of all because there is a lot of talk about how bogged down the courts are since COVID, and now we spend time doing this rather than getting on with doing the job.”

“Seems to me like a form of Maoist training to ensure correct thinking exists in our institutions,” he added.